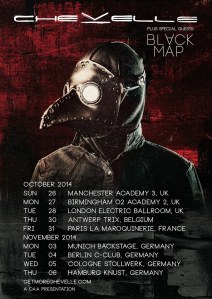 First built as a cinema for the US Air Force, Columbia Club—or C-Club as some lovingly refer to it—is an intimate venue with its roots in the cultural. Its monthly program always boasts an impressive lineup of musicians, and Nov. 4 was no exception: a nearly sold-out show with Black Map and Chevelle. Two artists on the bill, short and to the point. A night of rock and roll with no frills.

As the crowd formed, the people were packed in tightly, with a few lingering around the merch tables. Black Map took the stage without warning, and fans began turning their attention toward them. One could tell that there was a hint of uncertainty about the band, as the majority of the crowd was awaiting Chevelle, the evening’s headliners. As such, Black Map had a bit of work to do to win them over and make them move. But the band wasted no time. Ben Flanagan, formerly of the Actual and The Trophy Fire, stood behind the microphone, swaying to the heavy melodies aurally creeping around him. He took his guitar in hand and someone in the audience screamed “Awesome!” as the band launched into “Code.” “Watch your step”—the first lyrics served as a warning.

Quickening the pace, “Gold” was next on the setlist, full of energetic instrumental moments with driving drum beats delivered by Chris Robyn. Robyn grimaced with every hit: a facial expression created by shear force and existing on a liminal emotional plane between pain and pleasure. The cymbals couldn’t keep their position and the roadie had to rush to tape them down mid-song. But as the band continued, Black Map created a sense of urgency with its sound, and no object— inanimate or otherwise—was allowed to be stagnant. Case in point, one man nearby played air guitar and worked up a sweat from the floor as beads trickled from Flanagan’s beard and splattered onto the stage below him. “You guys are giving us energy. It’s good,” Flanagan said. But one also gets the feeling that this is how Black Map plays regardless of the scenario—in the studio, in a venue of five, or in the filled space of C-Club. There is no compromise. There is only the drive to create layers of beauty and heaviness, of melody and metal dissonance.

Mumbling a few words explaining how the next song was about Bukowsi, the band chanted off, “One, two, fuck you,” and delved into “Chinaski.” “Such little I require/Just leave me to be now,” crooned Flanagan before the breakdown began and Mark Engles, of Dredg renown, became lost in a trance of chugging and repetitive rhythms—differing largely from the intricate guitar parts he had been weaving in and out of the previous compositions. There was no respite before “Melee” drove its way into the audience. The audience was allowed a moment to breathe a little deeper as “Ropes” was played—slower and a bit more meditative, but still a wave of sound that one doesn’t wish to outrun. It almost felt like one should be given the option to escape, as the music is aggressive, like bullets formed of chords and percussion, until Flanagan’s vocals offered a melodic place of higher ground, an ethereal exit.

The last song, “I’m Just the Driver,” seemed to arrive in a hurry. The band succeeded in making time move faster than it seems: a bittersweet side effect of a good show. Broken drumsticks were thrown into the crowd, as audience members shuffled to catch them. Though the audience did not initially know they were at the venue to see Black Map, eventually the festering ball of energy broke and no one could resist moving. Black Map left the stage as quickly as the band stepped upon it: No banter. No filler. But there is no need to decorate or accessorize. One almost felt sorry for Chevelle, who had to follow a stellar set that took no prisoners.