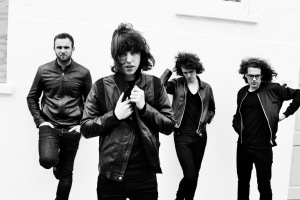 Catfish and the Bottlemen – Photo courtesy of Primary Talent

“No matter what gig, I always just shut my eyes and pretend we’re playing to millions.” Catfish and the Bottlemen—not an easy name to say in a hurry—is the kind of band that values the loud and the brash. Big choruses, big haircuts, and a big, no, huge dose of confidence has seen this band of old friends blow up this summer, ahead of the release of debut album “The Balcony” in September. But, don’t be fooled, the Bottlemen are anything but new to the road.

As Van McCann, the band’s frontman, put it: “Everyone always says, ‘Oh, you’ve blown up over night!’ Yeah, if you call seven years overnight? It’s not annoying… it’s kind of nice that people think we blew up overnight, ’cause at least they don’t remember us when we were shit.”

Berlin Beat met Catfish and the Bottlemen back in August. Seated on a sun-drenched bench overlooking the Spree, just down the road from FluxFM (where the band was due to play live on air later that afternoon), the four-piece—McCann, Johnny Bond, Benji Blakeway, and Robert Hall—were in town for Berlin Music Week, the band’s first ‘proper’ show in the capital. Whilst the rest of the band set up in the FluxBau, McCann, the band’s appointed interviewee, talked with infectious, overwhelming enthusiasm—an impressive feat considering the band was literally just out of the bus after a sleepless drive from Amsterdam.

Very much a dominating frontman (the rest of the band seemed extremely laid-back in comparison), McCann is a fizzing ball of dynamite: “People are always surprised by me,” he said. “I, like, love doing interviews. As much, if not more, than doing gigs. When I was young, every night me and my dad, we’d sit and talk about music the whole night… I just love talking about music. I like lyrics and I like talking to people, the chat and the singing.” He talks at a rate of roughly 1,000 words a minute, describing his own role within the group: “I kind of see it like, I draw it and [the band] paint it? They make [the songs] look… they make it all look bigger, more cinematic.”

Essentially, Catfish and the Bottlemen has a few, clear-cut priorities. The four work really bloody hard—last year they played around 100 shows across Europe and the UK: “We’ve played every single venue in the country.” They really, really love their fans: “Our fans are just a group of mates now, you know?” And most crucially, they have massive, massive ambition.

Although the band is signed to Island now, with music produced by Jim Abbiss (Arctic Monkeys, Adele), and has the same agents as Noel Gallagher, Catfish and the Bottlemen has been plugging away at the band for a really long time. The current situation might sound shiny, but it’s borne out of years of elbow grease. McCann reflected that although it’s maybe easier to make music if you’re “a fucking posh rich boy,” at the end of the day, it’s no big deal. “I mean, if was rich I’d do the same. It just so happens that we were on the dole, and we did this the way people on the dole do it. Our next-door neighbors didn’t work at Island; we got a deal because we went and banged on their door, and they eventually went, ‘Yeah, you’re good enough.’”

McCann’s view of the industry is simple: “the best bands in the world are the biggest bands in the world.” But although he tries to hide it, his view is laced with a little cynicism. He joked, “Well, the NME won’t touch us now. They’ve turned us down for six years, and now we’re good, they don’t want it. Those bands that pay to get on magazines and have big multi-million campaigns behind them, we don’t have any of that. The music that’s coming out of the UK at the moment is very artsy… people pretending not to be rich and dressing in charity shop clothes and all that. Our music is just based around the songs.”

Since August, the NME has, in fact, reviewed “The Balcony”—and as McCann rightly predicted, it was not at all favorable. It dubbed the group as “dated” and “about nine years too late,” aligning the Bottlemen with early noughties bands like The Kooks and The Courteeners: perhaps an interesting reflection on musical trends and contemporaneity, but a discussion that’s wholly irrelevant to Catfish and the Bottlemen’s simple mission statement. As McCann put it, “we never had any money, we never had any help, so we’re not afraid of losing it. It’s irrelevant! We may as well just make the best of it.” And, to be fair, the lead singles from the album, “Kathleen,” “Pacifier,” and “Homesick” definitely do draw on that early 00’s huge-indie-chorus tradition. But what they do, they do well. McCann likes a band that “makes you put your arms in the air,” and that’s exactly what these songs set out to achieve.

There’s a straightforwardness that’s refreshing, and irrespective of the mainstream media, the band’s fans are responding. In the end, “The Balcony” reached number 10 on the UK chart—no mean feat for a rock band, this year—and they play Berlin’s Comet Club tonight, but it’s already sold out. Say what you like about Catfish and the Bottlemen; the band’s having a brilliant year. As McCann said, “All this isn’t scary at all. The bigger it gets, the more comfortable I get. I can see us playing stadiums.”

Catfish and the Bottlemen play tonight at Comet Club in Berlin. The show begins at 21.00.