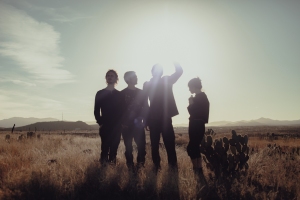 The past few years have been busy for Hundred Waters, a four-piece out of Gainesville, Fla. After forming in late 2011, the group went on to release two full-lengths and two EPs, along with playing spots at multiple festivals and touring the US, UK, and Europe. But in spite of the band’s level of success today, there has been a fair amount of struggle.

“We’ve definitely done our time,” said member Zach Tetreault. “[We’ve] roughed it pretty hard out in the US [with] playing a lot of shows back-to-back, and not having hotels and not having, you know, anything lined up for sleeping, and just kind of either sleeping on the side of the road, or…getting shitty motels every night.”

At the same time, Tetreault admitted that he and the other members—Nicole Miglis, Paul Giese, and Trayer Tryon—didn’t necessarily set out with intentions to get this far, or to accomplish as much as they have. In the beginning, it was primarily about playing music.

Hundred Waters’ first album, a self-titled LP, came out in early 2012 on collective label Elestial Sound, but was rereleased in the latter half of the year on OWSLA. That label, which was founded by Skrillex, gave the band exposure to a wider audience, and though the artwork was, according to Tetreault, “refined” in between the two versions, the recordings themselves remained unchanged.

“We didn’t want to change anything about that aspect of it. We felt like…we put a lot of time and a lot of thought into the way that album was sonically put together, and for us it was…that proper step in getting it out to as many people as we possibly could,” he said. “We had never actually put it out on iTunes or…Amazon or anything like that when we self-released it, so we had always gotten a ton of emails from people saying like, ‘Where can I get this? Why can’t I find this anywhere?’ The only place that you could really get it was from us, physically.”

When the album came out for the second time, it was not only more official than the first release of it, but also something that finalized things for the band, in the sense that the members felt not only like Hundred Waters had lasting potential, but also that they could move on to the next phase.

“It was definitely like a sigh of relief for us,” Tetreault shared. “We certainly celebrated the closing of that chapter.”

And once it was out, Hundred Waters was able to refocus its energy on the live show, which seeks to reinterpret the recorded music.

“We’re actually able to recreate the recordings pretty distinctly in the live format. Like, if we wanted to, we could play the songs almost to a T, but we don’t like to do that,” Tetreault explained. “We prefer to…create, like, soundscape intro washes and outros, improvisational sections where we can like kind of unwind a part and get people moving for a minute, and then snap back into the song. I think, just in general, what a lot of people might not expect but they find out when they see us live, is that our live show is a little bit heavier than what you would expect from listening to the album. I don’t know if heavy’s the right word, but it’s…punchy and it’s bass-y, and you definitely feel it, you know?”

He stressed the importance of changing things, not only to continue having fun being creative with the songs, but also to make things more interesting for listeners and audience members.

“When we go out and see our favorite bands play, that’s the sort of stuff that, like, takes it to the next level for us,” he said.

After Hundred Waters’ album came out, the band was already hard at work on album number two, this year’s “The Moon Rang Like a Bell.” Its beginning stages were, according to Tetreault, put together when the band was on the road, something he attributes to Giese and Tryon, who are good at using that time to create.

He also noted that it has been instrumental in inspiring himself and Miglis to also get into writing while on tour.

“As we’ve been on the road more, everyone’s started to develop that side of their brain,” Tetreault explained. “That makes it so that when you get home, and you are like in that solid, stagnant state where you can focus and go into a studio and record, or whatever, you know what you need to do, and you can get it done like a lot quicker.”

Meanwhile, the album has received positive reviews, in large part because Hundred Waters has done more than simply write a new chapter. Instead, this next step is where the plot thickens, with new elements and new intensity, all the while maintaining a recognizable voice.

Or, as Tetreault put it, the songs are more polished and in-tune with what the band is evolving into.

“I guess the songs just have, like, a maturity to them that maybe we hadn’t quite realized with the last album,” he said. “And I think we’ve taken a lot of different influences into this album that we’ve all picked up…since we’ve been on the road and been exposed to so much new music…it’s definitively a different direction, but not like pivotally. I think it’s just more focused.”

Currently, Hundred Waters is on a European tour, which lasts through most of October. Being able to play to a room full of people, and have even just a handful of them feel something, is what Tetreault considers to be one of the best parts of what he does.

Hundred Waters plays tonight at Kantine am Berghain in Berlin. The show begins at 20.00.