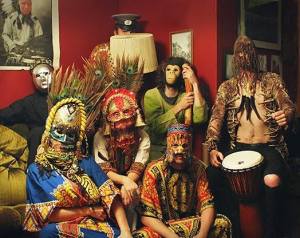 Voodoo-infused Swedish cultists Goat whirled into the Postbahnhof last week to celebrate the release of a much-anticipated second LP, “Commune.” “Commune” is a sonic safari, a guided tour down the many halls of psychedelia—psychedelia in the true, perception-shifting sense of the term. Off-kilter drum patterns drive against chants and howls, braying guitars bursting like heavy and tropical fruits across the weave, forming rich and colorful tapestries. Goat is also renowned for intense and enthralling live performances, the Berlin installment of which was no exception.

Fellow Swedes Les Big Byrd opened the evening with a rolling, slightly glittering brand of psych; it was music to skateboard down empty streets to, music to watch nighttime hills from train windows to. Meanwhile, collaborator Anton Newcombe (spearhead of the infamous Brian Jonestown Massacre ship) was waiting in the wings to spin records during the interlude.

As the dim-colored lights rose to an expectant glare, the stage was set with branches and streamers, and smoke began to leak in swirling columns. Three figures in differing masks emerged from the curtains, silent and slow-moving. They took their places and began thundering out the bewitched soundtrack. When a pair of barefoot women in exquisite headdresses leapt to the stage brandishing sticks and pointing them toward the foreheads of their audience, the ‘ritual’ began—for a Goat concert names itself in quite fitting transcendental terms.

The set reached out with glimmering fingers and spanned both records across an intense hour-and-a-half of psychedelic exorcism. Gems from 2012’s stunning debut “World Music,” such as “Let it Bleed” and “Goatman,” drew the jostling crowd closer and closer together, ribbons of marijuana smoke dancing between shags of shaking hair. The new tracks, heavily matured and moving in more complex patterns, were welcomed by an adoring crowd, which bunched closer and closer together with each passing minute, until the individual bodies entangled into a single heaving, writhing mass. The climax was reached, not at the end of the show, but with “Run to Your Mama,” which exploded into an extended primal jam, drums and shrieks playing off one another in a jungle showdown.

An encore was, however, thunderously demanded, and provided what could have almost been a second set. The room was hot, humid, and pushing toward wreaths of audio ecstasy by the time the pair of ritual conductors collected their sticks and disappeared into the dark folds of the night. Only the gentle blare of the house lights could tease the ruffled heads from their daze, guiding them back to their separate limbs.

With two powerful records and the magic of a live experience in tow, Goat is one of the most enigmatic and exciting bands around, with a cult which can only continue to amass new devotees under its bejeweled and feathery wings.