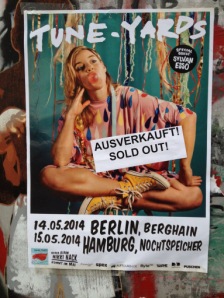 A sold out sticker was slapped over the tUnE-yArDs poster on Berghain’s infamous door. Merrill Garbus and gang hadn’t played in the capital for a fair while and it showed; an excitable, chattering crowd curled around the corner, stretching back over the rubble wasteland behind the venue.

The May appearance was a show in honor of tUnE-yArDs’ third album “Nikki Nack,” a riotous, razor-sharp body of work stained with all the colors of the rainbow. While staying true to Garbus’ trademark sounds–incendiary percussion and soaring, rhythmic vocals–this album represents an undeniable ‘next step.’ Although it’s perhaps her most accessible LP to date, it’s also a concentration of intent: lead single “Water Fountain” is a teeth-chattering, rib-thumping, bell-ringing kind of number, one that showcases the attitude and sheer musical deftness we’ve come to expect from a tUnE-yArDs record.

It’s an attitude that can only be amplified live, and particularly in a venue like Berghain. It was hard to imagine a stage more suitable, as the echoing, cavernous space of Berghain was filled to the brim with a cacophony of acapella vocals and multi-layered rhythms. Garbus, touring with her usual double act and excellent electric bassist Nate Brenner, has further fleshed-out her live line-up to include a formidably dextrous drummer and two brighter-than-life, peacocking singers. Visually, the show was mesmerizing, but more importantly, the sound was full-bodied, textured, and exuberant. It was impossible not to crack a smile and tap a foot–at the very least–as Garbus and company shimmied and spun through tracks showcasing the very best of tUnE-yArDs’ three LPs.

Long-serving favorites like “Gangsta,” “Bizness,” and “Sunlight” fueled the Berghain crowd with a riotous, carnivalesque energy, and shouts of “don’t stop!” came thick and fast when the band members took a second to catch their collective breaths. A pared-down performance of “Rocking Chair” was a particular highlight, drawing the excitable atmosphere into a more intimate space–a space that allowed the band to flex its genuinely jaw-dropping vocal synchronicity. From here on in, the remaining hits came thick and fast, and a stamping, electrified audience demanded an encore.

Mid-set Garbus whispered, conspiratorially, “in my old age I’ve got a little informal”, but you’d never guess it. Hers was a victorious performance: brash and bafflingly accomplished, with a knife-sharp line drawn between sugary and confrontational. Gleefully, Garbus promised a return show sooner than the last, and there’s a full-capacity Berghain crowd ready and waiting to dance once that promise is made good.