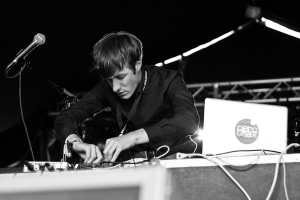 “I like the contrivance of of pop music,” said William Doyle, seated in the window of Monarch. “I like it as an escape, a form of escapism. I want music to be a transportive thing.”

Doyle–currently touring his solo project East India Youth–cut a sharply-suited figure incongruent with the dark and often all too sticky venue. That day, a Wednesday, was his inaugural Berlin headliner, and the show that night saw Monarch’s crowd caught up and swept away from that tiny, sweaty room above the chaos of Kottbusser Tor.

East India Youth is a spectral, electronic venture so vast and orchestral that it’s almost hard to imagine there’s only a single pair of hands at work. To the uninitiated, Doyle’s set-up appears deceptively simple: laptop, lots of twiddly knobs, and an occasionally used guitar, but it belies a sound and a performance that’s strikingly physical. Admitting that he always gives himself “too much to do” is indicative of a perfectionist, focused drive that’s clearly done him well so far.

In a twist of fate that’s almost become fable, East India Youth’s first EP, “Hostel,” was released by The Quietus in 2013, on a brand new label established for that very purpose. A true fairytale beginning, and invaluable groundwork for what was to come: this year’s album, “Total Strife Forever,” is a complicated, rewarding work that plunges and climbs, broaching dark arctic depths and scaling teetering, sheer-sided cliffs, simultaneously savage and shimmering.

In a past life, he fronted indie band Doyle and The Fourfathers, and that singer-songwriter desire to story-tell is still central to his work, albeit in an abstract, mostly non-verbal form. Doyle laughed as he related the difficulties inherent in completely re-imagining his creative process: “I was like…I’m making music, therefore I must sing over it. That’s the way to do it. Then I was trying to finish the vocals, it was just going on and on and on…in the end I went ‘right, get rid of them.’ I took a step back and was like, ‘wow…there aren’t many vocal tracks left at all, but I’m fine with that.’ I think they’re spaced out on the record enough that it creates a journey for the listener.”

The lyrics that did survive the cut are cryptic, too, refusing to yield any easy answers. “Yeah,  because I wrote them quite quickly, I just wanted to get out that immediate, emotional, visceral response. [“Total Strife Forever”] feels intensely autobiographical to me, but in the most abstract of ways. It’s…more an atmosphere.”

The result is an album that’s a textured amalgamation of genre. Upcoming single “Heaven, How Long” is eerie and glistening, soft and enveloping, and thrown into sharp relief by its track-listed predecessor, “Hinterland,” a roaring, undeniably techno beast purpose-built for an airing in Berghain-like clubs. This isn’t to say that Doyle’s range of influences and sounds aren’t cohesive: “I still look at myself as a pop musician, in the weirdest possible way,” he explained. “Pop should be that strange and that challenging.”

East India Youth is both strange and challenging–and it’s this undefinable middle ground that’s provoked such an emotional response from critics and audiences alike. Doyle shuffled, a bit awkwardly,  saying, “I wanted it to be like that, but I don’t want to try and force people to feel a certain way–I just wanted them to feel something about it. It’s reflecting where I was when we made it, a mixture of highs and lows–just like normal life really–but in a very condensed period of time, so it’s staggering highs and unbelievable lows.”

It’s clear that as East India Youth has grown, it’s become a project that’s increasingly conceptual. Although Doyle laughs at the suggestion that going solo has turned him into a diva, he admits to having become “a bit of a control freak,” now he doesn’t have to compromise creatively. “Total Strife Forever” is intended to be read as a whole: “[Albums] are my favorite format. [Track-listing] will never be an arbitrary thing. I’ll obsess over it.”

The accompanying visuals, too, have developed a strong story of their own. The video to “Heaven, How Long” is a stunning, confusing work directed by Joe Spray. Building from organic landscape to afrenetic, disorientating visual explosion, it’s the perfect accompaniment to a song (and an album) that renders the same emotional effect. Doyle was effusive in his enjoyment of it: “I’m so happy that it all came flooding out and now it’s in a visual space. For the press shots, we’ve used MIDI notes over my face. Those white lines have become the theme of the album. Everything ties in, and creates this immersive world that the listener can get into.”

Talking of his performance to come, Doyle admitted he’s reluctant to interact with a crowd because the piece should be taken as a whole. “I just can’t engage, no, and I hope that doesn’t come across as being a bit arrogant but like, I don’t want to break the journey. It’s quite a lot to take in without me talking nonsense in between, know what I mean?” He cracked a grin, “I don’t want to break the mystique!”

As promised, and expected, the show was completely absorbing. The immediate physicality was unexpected and contagious, and the set was fluid and seamless. The audience was moved from the intricate and delicate, to a crescendo of euphoric synth, then confronted by the demanding, heart-thumping “Hinterland.” When it came crashing to a halt, there was a moment of caught silence. “That only felt like ten minutes?” whispered a thoroughly wind-swept looking man by the speakers–an apt testimony to the immersive, transportive powers of East India Youth.