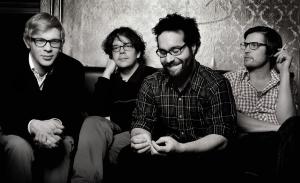 It would be a stretch of the imagination to suggest that Hamburg-based indie rock outfit Herrenmagazin is a literary group. Yet there is a certain Joycean quality to the evolution of the band, a history which, when traced from origins to present, certainly is reminiscent of Stephen Dedalus’ stream of consciousness and his coming of age journey that ultimately valued expression above all else.

The group, which has undergone a couple of lineup changes in its existence, has since 2009 consisted of lead singer and guitarist Deniz Jaspersen, guitarist König Wilhelmsburg, bassist Paul Konopacka and drummer Rasmus Engler.

Herrenmagazin’s earnest first full-length, “Atzelgift,” was released in 2008. Shortly afterward, the band had enough material for a follow-up, but due to dissatisfaction from its label, was forced to rework material to have songs suitable for a sophomore effort, “Das wird alles einmal Dir gehören,” which came out in 2010.

Mirroring Dedalus’ journey, the group was, at this point, forced to figure its next step – whether calling it quits or going for broke. But the spirit of epiphany prevailed, and now, some seven or eight years after Herrenmagazin’s formation, and with the third full-length effort on the horizon, the four finally feel as though they’re coming into their own, even if that simply means having no idea what happens next and being OK with it.

“The thing is, we are all so open right now. We all feel very open to what lies ahead,” Jaspersen said. “It’s hard being a band, and staying together, and I don’t look for the album after. I just focus on what is now.”

And right now, what lies just ahead is album number three; when they weren’t playing festivals, the members of Herrenmagazin spent last year writing songs for it. But because all four have jobs, go to school, or play in other projects, finding the time to rehearse and fine-tune the music has not been particularly easy. As a result, the entire process has taken much longer than in the past.

“Normally we work pretty fast in writing,” Engler said. “And this time, we’re not, which is a good thing, because it means that, yeah, it’s totally different, the songwriting process.”

More specifically, he referenced the fact that the band is writing more collectively now, with each member contributing ideas. Although the songwriting process starts out the same, with the four hanging out in Jaspersen’s living room and messing around with song ideas, the end result is songs that are more cohesive and representative of the band as a whole.

“I’m even more excited for the next record than for the last, because when we recorded the last record it was, I don’t know, we were just trying to prevent the worst,” Jaspersen said.

He also shared that this new style doesn’t necessarily mean the sound of the band has drastically changed, rather that Herrenmagazin is finally realizing its potential.

Indeed, the songs are more representative of the band as a whole, a fusion of the four personalities and the years spent playing together. The content, however, has changed very little.

“We have talked a lot about politics, and the world being a bad place. And it still is. It’s getting worse and worse,” Jaspersen said, referencing lyrics in the past to the lyrics that will be on the new album. “It’s not really a big change. It’s still depressing. There is no love song on it. I quit writing love songs, like, even sad love songs.”

Yet Jaspersen isn’t the sole lyricist; he shares writing duties with Engler. And unlike most bands, who write music first and lyrics second, Herrenmagazin often writes the songs to fit specific words.

In fact, the group has a saved collection of lyrics, and will either pull from the pool and write around a selection, or look through the lyrics specifically to find something that fits the music being worked on, and then meld the two together.

“We’re the only band, in all of Germany I believe, that has more lyrics than music,” Jaspersen said with a smile.

And while some writers feel a personal sense of loss when something they’ve written just doesn’t fit in a poem or a song, Jaspersen said that is not the case with Herrenmagazin.

Engler agreed, sharing that the unused or discarded writing always exists somewhere, in the instance that it ever fits another song.

“What is written down won’t vanish,” he said.

Additionally, Jaspersen shared the band doesn’t labor over writing songs, or trying to make the live songs sound exactly like the recorded versions, an attitude which has both its upsides and its downsides.

“We are not perfectionists, and that’s a problem…if something doesn’t work that well, really quick, we lose interest. We’re like cats,” Jaspersen said. “[But] the good thing is it’s always fresh…we try to reach that goal that the song we play on stage is at least close to what it is on the album. We just don’t have time to rehearse. We don’t have time to make up variations, you know, or breakdown parts.”

The advantage to this is that the Herrenmagazin of now has a better sense of vision than in the past, because the four don’t have time to waste.

“We are a little more focused…in what we want, in that we know what a song sounds like,” Engler said. “[And] we know what we do not want.”

And that knowing makes the difference, because it is what keeps the band going.

“To me, it’s, on the one hand, it’s natural to write songs. It just feels natural. I always tell that story, you know, when my brother taught me my first two chords, he taught me…E minor and A. He taught me the chords, I took the guitar, walked up to my room and wrote a song. It’s, I don’t know, it’s, like, I don’t think that I can ever stop writing songs,” Jaspersen said. “On the other hand, I love people, you know. I love people and there is no better thing, I can’t imagine any better thing than writing something and doing something that means a lot to people. That is why the response is so important, you know..in a way we are addicted to love. Love junkies.”

Herrenmagazin plays tonight at Astra in Berlin. The show begins at 20.00.

One thought on “Interview: Herrenmagazin”