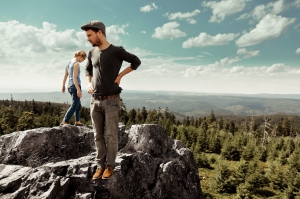 Talking to Turtles is an unassumingly sweet folk-y duo from Leipzig that likes to think the music it makes is what turtles might sound like, if they could speak for themselves.

It seems no one will ever truly know, but that didn’t stop Florian Sievers and Claudia Göhler from putting out their second album, “Oh, The Good Life,” under that premise.

Whereas the debut album was created at home in a living room, Talking to Turtles flew to Seattle to make this one, spending two weeks recording and one week mixing the music. It was released Aug. 19 on DevilDuck Records.

“It was really an adventure for us,” Sievers said – an understatement if there ever was one.

The difference of location is one variance between the first and second album; another change is the way the songs were written. Whereas the first was written in its entirety by Sievers – who initially functioned as a solo artist – the second was a collaborative effort between him and Göhler.

“It was almost the first time that we started to write songs together – the lyrics and the melodies as well,” he said, mentioning that the initial challenge was to find a way to meld their energies together. “Simply writing a good song…is the main thing and the hardest thing.”

Sievers also mentioned just how enjoyable the recording experience is, because of the lack of restrictions with what can be done to the music.

“It’s some kind of playground,” he said. “You can do what you want…there are no limits…in the studio you can give the songs what they need.”

When it comes to playing live, he said emotions and feelings toward performing in public have evolved over the years.

“In the beginning we both were some kind of afraid on the stage, and today it’s more [that] we’ve played so much, so we are still nervous before concerts, but it’s really not scared,” he said. “In the afternoon, we look forward to the evening to go on stage, and when we’re on stage, yeah, we feel comfortable there.”

The tour that is currently underway consists of not just Sievers and Göhler, but two additional back-up members, making Talking to Turtles a four-piece. And while Sievers said that having more musicians increases the live sound and allows them to play music more accurately aligned with the record’s sound, he also noted that the stripped-down, purist approach to the songs is something he and Göhler value just as much.

“It’s important for us to be able to play as a duo as well,” he said, sharing that the two sometimes play one-off weekend shows together, and will tour without a backing back this November.

This is because it forces them both to pay attention to what is significant about the music, and pick the elements from the album that will speak to the songs themselves.

“When you are only two people…you have to bring the song from the record back to its main point,” he said of the live experience. “You can push each other a little bit forward in a creative way.”

Talking to Turtles plays Saturday night as part of the Berlin Independent Night at Comet Club in Berlin. The show begins at 20.00.