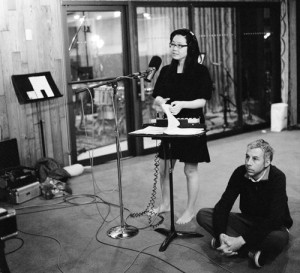 John Vanderslice has a reputation for being one of the nicest guys in the music biz. The 44-year-old singer-songwriter has been on the scene as a solo artist for more than a decade, and also served as proprietor of San Francisco-based recording studio Tiny Telephone for nearly 15 years, so needless to say, he’s garnered quite a bit of a following.

Outside of the music world, he is not only a charismatic individual, but instantly likable, due in large part to the genuineness of his spirit. His diction is peppered with the words “like” and “totally” and he speaks with a thoughtful and somewhat restrained confidence. As he talks, he emanates a real enthusiasm in the oft-boyish charm that encompasses his words and belies his age.

This carefree and kindhearted spirit could be partially due to the fact that he’s a solo artist; Vanderslice, who is a veteran of a handful of indie rock bands, finds that being independent in his music making is much more liberating for him overall, in the sense that he’s able to make his own decisions, worry about only his own schedule and perhaps most importantly, do things on a faster timeline.

“I’m like really persistent,” he said. “I’m really ambitious and really…aggressive about things that I want.”

While that formula works quite well with his relentless personality type, as someone who has released – on average – an album a year in the past decade, Vanderslice is surprisingly not always overflowing with inspiration.

“After a record’s done, I am completely without an original thought,” he shared. “Like, I am, like, so tapped out…I really feel totally empty.”

But luckily, he said he always recharges, even if it sometimes takes longer than he’d hoped. And it’s the experience of traveling around on tour that gets him back in songwriting mode.

“Touring is just so intense. It’s so weird and wonderful and, like, extreme,” he said. “You’re processing a lot of compressed images. You come from that and you can easily just go into, you know, woodshed mode.”

As for who or what he uses as a sounding board with the music he writes, Vanderslice said that his wife and other musicians he collaborates with naturally are subject to it. But more than anything, the music has to – first and foremost – sit right with him.

“Once I write something, I do listen to it, like 100 times, before I decide to put it out,” he said. “I don’t really worry about censoring myself before the action of, like, creating, but [I worry] once something’s mixed and done.”

Things that fall under the umbrella of what Vanderslice typically worries about include: if a song is mixed well, if it’s interesting, if it’s true to the body of work he’s already produced, if the song holds up well as a musical idea and ultimately, if he wants it released.

“The main thing is just to have the patience…and time…to edit yourself,” he said. “I do a lot of self-editing for sure.”

However, in the past year, Vanderslice has been stepping out of that role more and more in the creation of his newest work, “White Wilderness,” which was released earlier this year on Dead Oceans. Instead of utilizing the standard singer-songwriter formula that he has become famous for, this album features a live collaboration with The Magik*Magik Orchestra.

The two first appeared together in January of last year, during the 10th Anniversary Celebration of Tiny Telephone. But the history begins before that, when the orchestra’s director, Minna Choi, approached Vanderslice via e-mail, asking if they could be the official orchestra for the studio.

The idea of such a collaboration, which Vanderslice described as “genius,” was so perfect, in part, because it’s not such a common occurrence.

“It might have been normal, in like, the 50s,” he said. “But I’ve never heard in the modern era of anything even remotely close to this.”

Aside from the initial appeal, Vanderslice also found himself impressed with Choi’s resume and attitude.

“I’m really direct with people…and she had a directness that was, like, I just recognized it from my own way of operating,” he said. “That’s a really intoxicating thing, is to be around someone that’s really ambitious and that’s not, like, just afraid to, like, ask for it.”

Those attributes became even more apparent from the initial moment the two began working together.

“It was a perfect, like, match-up,” Vanderslice said. “It worked perfectly right from the beginning.”

And not only did the orchestra become a studio staple, but ended up facilitating the major framework of Vanderslice’s next album. In fact, he relinquished almost total creative control to Choi in the composition of the nine tracks.

“She has everything to do with the music,” Vanderslice said of the songs on the new album. “All I did was really provide very very sparse demos.”

While it was indisputably new territory for Vanderslice, it was also – in a sense – the necessary next step in the evolution of his music, albeit one which was admittedly not intrinsic to his nature.

“It was a tremendous change for me,” he said. “It was so refreshing not to be, like, killing this material.”

And although he only provided the skeletal work for the songs, even with the full orchestration, they have his trademark sound and style all over them.

The most noticeable difference between “White Wilderness” and the Vanderslice repertoire’s predecessors is the amount of time that went into it. Where Vanderslice previously spent months and months agonizing over every detail of his past releases, the entire new album was recorded and mastered in three days.

“I think that, for me, it’s way more immediate sounding,” he said. “And it’s also the record that has the most mistakes of any record I’ve made, and I think that’s a great thing.”

In fact, he referred to the ability to leave those mistakes in not as a show of weakness, but rather a sign of confidence.

“It’s going so well, and it’s so much of what you wanted to put on tape that…you’re not nervous about every little variation,” he said of the experience.

The first time Vanderslice was exposed to the material in its entirety was when he met with the group for rehearsals, three days before they were scheduled to record.

After trying the music out together and getting it down, everyone then met up at Fantasy Studios in Berkeley, Calif., where they had booked two 10-hour days. Each song had only two takes, and at the end of that 48 hours, only the vocals remained to be finished.

“Nothing was manipulated after it was recorded,” Vanderslice said. “It was like, absolute, like, realism, you know…they’re beautiful arrangements, all the players are top notch…I’d never really played that much music with that many people live, and it has its own power, it has its own force.”

Fast-foward to this week. After having taken the songs on the road across America, Vanderslice has touched down in Europe for the next leg of his tour. However, the set this time around will be truer to his solo version self, and showcase different arrangements of the “White Wilderness” songs. Additionally, he will be sharing the stage with drummer Jason Slota, for a performance that will be what he has coined as “pretty loose and punk, down and dirty.”

In the meantime, Vanderslice has already revealed that this won’t be the end of his collaboration with Magik*Magik.

“And by the way, we’re doing our next record together too, so it’s like, definitely, we’re locked into this,” he said.

This next album will focus more on the vocal choir aspect of things, even venturing so far as to have a few songs that don’t have any harmonic instruments on them.

In light of talks of a new album already, Vanderslice said that the cycle of putting out records can be a double-edged sword, because of its propensity to be instable, something which he likened to playing a game of chess with yourself.

Yet at the same time, he shared that the moment when he receives one of his records in the mail and and listens to it the very first time, it makes it all worth it.

“You pull out this, like, it’s the first vinyl that’s been pressed from this master, you know, this analog master of your record,” he said. “And it’s the first one, it’s 001, and you put it on the turntable, and you listen to it…and you think ‘wow, I made this, I elaborated with other really interesting people, it was like an incredible struggle for a year, and it’s done, and it is, like, encoded and encapsulated in, like, this wax,’ and it just seems to be the most mysterious…experience. And that’s really intense, I would say.”

John Vanderslice plays tonight at NBI in Berlin. The show begins at 21.00.