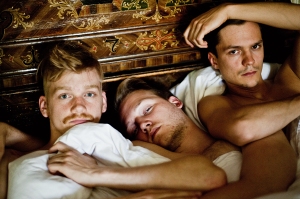 Back in 2012, a little indie rock band from Husum by the name of Vierkanttretlager came out with its debut album, “Die Natur greift an.” The album’s most popular single, “Fotoalbum,” placed sixth in that year’s Bundesvision Song Contest, putting the group on the national radar. Then earlier this year, Vierkanttretlager finally released its sophomore album, “Krieg & Krieg,” and just last week played a show at Berlin’s Bang Bang Club.

Though the songwriting process for the second album began in 2013, it took some time for the members to sort through the resulting songs and determine what kind of direction they wanted them to take. In contrast to the songs on the first album, which were written between the ages of 16 and 18, and based upon an entire lifetime of experience, the tracks on “Krieg & Krieg” are more representative of the time that has passed since.

Interestingly enough, whereas many bands find that their debut albums lack a certain sense of cohesiveness, the members of Vierkanttretlager found their first album was instead very intentional.

“The songs really belong together, they make sense together, and that’s something that is really great for us,” said singer Max Richard Leßmann. “And it’s a funny feeling to know that we wrote them, and something deep inside our minds made us put them together that way so it makes sense, without us being conceptual.”

Though he can’t explain how it happened, Leßmann admitted it likely has something to do with the band’s unique combination of members and how they work together.

“The way we make music is…we just go into the studio and just play,” he explained. “That’s how we [did] it from the first time we ever played music together, and that’s how we’re gonna do it ’til we stop. We’ll never change that. It’s perfect. There are no real borders for us because we can do actually everything we feel like doing.”

Indeed, many songwriters like to limit the structures they make music within, citing that no restrictions make things feel overwhelming, or too broad to tackle. But for Vierkanttretlager, part of what makes the band what it is is that freedom to pursue any direction it decides upon and adapt to the sound that makes the most sense.

“I think people like that we are that rock band which can be quite hard. And then on the other hand, we are this shanty folkish band for old people,” Leßmann shared. “It’s important for me to move on, to find new things, and to find myself in those new things, and find things that I didn’t know I could do. [And] that’s what our music is actually about, is finding a way together.”

While the music-making process is collective, Leßmann initially spends a lot of time alone so that he can write. Then, once the pen hits the paper and he comes out with lyrics, he’ll begin the process of sharing them with the band members and getting their opinions, which often leads to ideas, concepts, or words being moved around or altered.

Additionally, he noted that even after committing to lyrics, the meanings of the songs tend to change, or evolve, or present themselves in a new light.

“There’s one song from the [first] album that describes a thing that happened to me in a relationship, but [it] happened like three years after I wrote that song, and it seems to be like a self-fulfilling prophecy,” he explained. “After that happened, I could really understand what it was all about, and that song helped me understand it, although I wrote it a long time before that.”

And it’s not just the one song, either, but all of them, in some way.

“When you write, and you think about yourself—and that’s what I do, that’s where my lyrics come from, it’s all about self-reflection—then it will happen that you write things that you won’t understand in the first place, or you will understand them differently [later on in life],” Leßmann said.

All the talk about writing and self-reflection begs the question of what kind of person Leßmann sees himself as—and the answer isn’t necessarily straightforward.

In his younger years, Leßmann admitted most people thought he was outgoing and extroverted, but that the way he presented himself didn’t match up with how he felt.

“If you would ask anybody who doesn’t know me very well, who just knows me from the outside, you wouldn’t say that I was [an introvert]. And I wasn’t in my school time, for example. I didn’t really like to go to school. I was really loud and was offending the teachers. And if you would ask any of those people that met me in this phase of my life, they wouldn’t say that,” he said. “But what they didn’t know is that every day I came home and sat [at] my desk and wrote lyrics. And that’s how I do it still. [It’s] a really big part of me. And I just think I needed to get on stage and I needed to show myself, because I felt so misunderstood when I was growing up and going to school. Because the people always saw this loud guy, this angry guy, who didn’t want to do what they told him.”

In a way, Leßmann said that being in Vierkanttretlager—along with being active in theater for years—helped him find a way to navigate those different sides of himself, so that he can express himself loudly and get anger out on stage, but still be an introvert at heart.

“I’m pretty happy how people see me now,” he said. “They see me as this angry guy who thinks a lot, and that’s who I am. That’s just me.”

At this point, Leßmann brought up an interview question he once had, asking if he and the band members are still friends. His answer? Maybe they wouldn’t be friends anymore if they weren’t in the band, because it is the glue that has held them together.

“Now…we are better friends than we ever were,” he said. “At this point in time, we’re just so close and we’re just so productive together.”

Of course it wasn’t always easy, particularly when they were younger and all the workings of being in a famous band were new to them. But over time, not only have the members fallen into their particular roles, but they understand the ways in which their roles interact with one another and respect each others’ space, while still working hard to not lose sight of why they’re in the band together.

“It’s obvious that we won’t do it anymore if it doesn’t make any sense to us. So we will just go on as long as it makes sense and we have fun. We don’t need to…but right now we want to,” Leßmann said. “We have fun together. We like to work together. And that’s why we do it.”