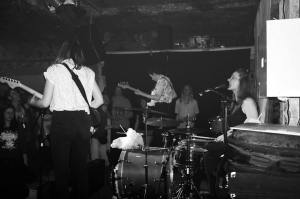 On one of the year’s first warm Saturday nights, a steady stream of mostly young, mostly artsy people stumbled across what might be Friedrichshain’s darkest courtyard to Antje Øklesund, an audiovisual laboratory located in a former furniture factory. A table full of cupcakes, free cotton candy, and live painting of the cutest piggies set the mood for the night: a children’s birthday party atmosphere that was both ironically broken and genuinely nice at the same time.

Except it was not a birthday, but the release party of GURR’s new “Furry Dream” EP (out on April 24 via Duchess Box Records). The Berlin-based garage pop/punk outfit has untiringly toured Germany, much of Europe, and even the U.S. since its founding in 2012, but for now, the three members gathered their friends at a cheerful post-industrial bubblegum-flavored beer party, and when the DJ played “Dancing in the Street,” it was obvious that the night was just about having fun. Or was it?

Support act Odd Couple seemed to confirm this notion at first by projecting Disney’s all-American family movie, “Beverly Hills Chihuahua,” on the wall behind its set. However, the music told a different story: the group’s stoned, effect-loaded, ceaselessly reverberant sound combined psychedelic weirdness with a Kinks-like catchiness and pop appeal—similar to, but not quite as ironic as, Ty Segall.

This was serious business; Odd Couple’s psych-solemn attitude, and the fact that over the course of the set, the two hardly spoke more than five sentences (and did not even mention the band’s name), made it clear that it was not all just about cotton candy.

Casablanca and drummer Laura Lee’s voices congenially explored every musical dimension between those extremes, combining coaxing and jeering, whispering and shouting. They even managed to include Pussycat Dolls’ “Don’t Cha” without engaging in pointless pop cultural mimicry namedropping. 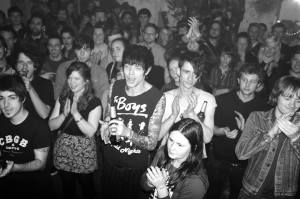 GURR is a band that’s eclectic and, yes, postmodern in the best way: the group takes what it needs from pop culture and redefines and reassigns it in any way it wants, until every stereotype is challenged and every confining label removed. And while the audience members obviously enjoyed themselves, and especially the band, at times they still did not seem so sure where they were or what they were looking at.

What is GURR then? It is both fun and fury, romance and rebellion, dream and disillusion. Unlike other bands who emphasize that girl can sound like a gnarl (say, Le Tigre), being nice is not just something the ladies in GURR only use as a contrast to prove how riotous they really are. GURR is much more subtle: it is never quite clear what is ironic and what is genuine—or if this matters after all. Maybe one can simply be genuinely ironic or ironically genuine, have cotton candy AND a beer. Even if it tastes like bubblegum.