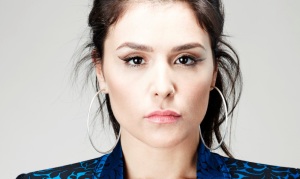 Upon seeing Jessie Ware perform in January 2013 at Amoeba Records in Hollywood, California, her soulful vocals stood out undeniably. However, there was something distant about her stage presence.

Fast-forward to Ware on stage in February of this year at Astra Kulturhaus in Berlin, and the story is completely different.

With her band silhouetted, the British singer emerged to “Running” from her debut album, “Devotion.” From the opening chords of the song, the crowd cheered with abandon, no doubt happy to have made it inside the venue for the rightfully sold-out show.

In a black blazer framed by angular shoulder pads, a ponytail, and a black button-down shirt, Ware commanded the stage with an engaging confidence and swagger. No one could take their eyes off of her. And when she launched into her latest single, “Champagne Kisses,” accompanied by pulsing lights, she left the mic stand behind and worked the stage like she’d been born on it.

If her new album, “Tough Love,” is a departure from the throwback R&B/soul of her debut album, the Ware on stage is a long-haul flight from the Ware of just two years ago. It’s always fascinating watching artists grow from album to album, tour to tour, seeing an artist with potential morph into an artist with swag.

Without backup singers, Ware was supported by a wonderfully good live band and a backing track that piped in for the choruses, but didn’t leave you with the taste of lip-synching fraud in your mouth.

During “Cruel,” Ware’s pure vocals shone as she danced subtly, rocking to the groove. She was into it and the audience was too. She hit high notes like a lead soprano in an African-American church choir, and as the song melded into the faster-paced, “If You’re Never Gonna Move” (formerly titled, “110%”) she spoke to the crowd, “Alright, Berlin. It’s Friday night. Are we gonna play hard this evening?”

Without missing a beat, the crowd cheered, and bodies swayed in mass to the bouncing bass line, which she praised at the end of the track with an, “Oh yes, you’re loud and drunk and it’s fabulous!”

After the title track, “Tough Love,” the band slid into the beach-y, calypso-vibe of “Keep on Lying,” and they were all a head-bobbing singular beast. While Ware harmonized with her backing track, the music dropped out for a bit to let the stunning, understated power of her vocals take center stage. She pled, “If this isn’t love, then I don’t wanna know,” so believably that you couldn’t help but wonder if the song’s muse was in the audience.

When the song was over, she confessed that she and her band had been sick and had to have IV drips on the tour bus on the way from Hamburg to Berlin, her self-proclaimed favorite city. Apparently, eating lots of profiteroles and Kinder Eggs before performing a concert is a bad idea, she said.

She flew through the next couple songs, enjoying moments with her lead guitarist. During “Sweet Talk,” a disco ball illuminated the crowd, and it started to feel like everyone in the audience should find a partner and start slow dancing as if it were a school dance. A really crazy, sexy, cool dance.

“Who’s here on a date?” Ware asked. But Berlin doesn’t hold the title of The Singles Capital of Europe for nothing. When no one raised a hand, she soldiered on by asking,  “Just friends? You fancy each other? This one’s for you.”

As the audience sang along to Ware’s “Kind of…Sometimes…Maybe,” it was hard to believe that no one was on a date, but rather that they didn’t want to define the outing with a title.

She flew through the next couple songs, with the loudest cheers coming at the opening chords of “Taking in Water.” And when “Wildest Moments,” her debut single played, many members of the audience raised their glasses in approval.

As the evening wound down, she informed the crowd that she doesn’t do encores, as she announced the last song, “Say You Love Me.” Encore or not, the audience formed what sounded like one mass choir as it sang the chorus back to her, “I don’t wanna fall in love. If you don’t wanna try.”

Not all musicians have mastered doing a 75-minute set without it feeling like it either dragged or flew by too fast, but Ware has. It was a sight to behold and awe-inspiring to take in.