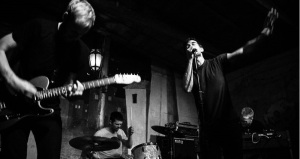 Singer Jason Orlovich is originally from New York, but in recent years found himself on the opposite side of the Atlantic. While doing a stint in Paris, he started making and sharing music online with some Danish guys he’d met on tour, and at some point, they all decided to see if it would work in a live band setup. So Orlovich moved out to Copenhagen and Total Heels was born.

“Copenhagen is a pretty easy place, especially when you’re doing stuff like music and the community that includes,” Orlovich said of living there. “I reached my limit with New York a few years ago and it was nice to connect with that stuff again. Copenhagen, the band, these guys; it’s been nothing but positive.”

Earlier this month, on Oct. 7, Total Heels released its debut self-titled full-length. Though the four piece—which also consists of Jacob Ankær, Jeppe Greve, and Jakob “Snake” Nielsen—has only been around for less than two years, Orlovich shared that, to him, the music on the album sounds dated in a sense, because it goes back to the band’s beginnings.

“It’s a real snapshot of the band when things were just starting. I still laugh when I think about screaming into my computer from Paris, as we were demoing some of these songs. It was so new and weird and uncertain, doing this thing remotely and then playing shows with no idea of how it would sound,” he explained. “I guess I think about the record as that debut where you can hear what the band is going for, even if they fall short or overdo it sometimes. The rest is up to you.”

Total Heels has played in Berlin before, and tonight’s show comes toward the end of a two-week tour through Germany, the Czech Republic, Austria, Switzerland, and France, and ending back in Denmark. And while some artists claim that performing several nights in a row can activate the auto-pilot, Orlovich shared that the songs are too personal for him to disassociate himself from their meanings.

“I can’t say I disconnect with the songs. Playing them live is such a physical thing,” he said. “The lyrics are a little intense, personally. It’s basically a bunch of stories about falling off the grid and going through some heavy stuff after New York. I tried to fictionalize those experiences, like moving away, the isolation, etc., but it’s hard not to be back there when I play them now. I doubt anyone can hear what I’m saying, but that’s what’s happening most nights.”

Back in Denmark, being a Copenhagen band carries a certain connotation on the international level, but Orlovich insisted that Total Heels doesn’t belong under that same umbrella.

“I can say with a good degree of certainty that we don’t fit. Copenhagen is clearly blowing up with bands like Iceage and Lower, and good for them,” he said. “We’re a few years older and priorities change. Copenhagen is a super small scene—we still all drink at the same bars, etc.—but Total Heels is definitely a world away from what people think when they read about the whole Danish underground…there’s a real sense that Total Heels includes some of the older rockers in Copenhagen…I guess the goal is to play for the old, employed, record-collecting crowd.”

But of course, Orlovich uses the word ‘goal’ lightly, because for Total Heels, it’s less about the end game and more about the journey.

“We’ve been doing music for so long, it’s just nice to let the momentum take care of itself. I wish I could say we have aspirations to play certain venues or countries, but it’s not that simple,” he said. “I can only speak for myself, but making solid records is probably [the] more important thing for me right now. There’s a real vision with this band and that’s pretty exciting.”

Total Heels plays tonight at Schokoladen in Berlin. The show begins at 20.00.

One thought on “Interview: Total Heels”