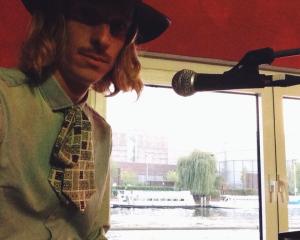 On the opposite side of the BVG building, one would never guess that there is a venue called Marie Antoinette, a place adorned with curtained walls, a view of the river and its night boats that pass by the picturesque windows, and an intimate crowd awaiting a night of acoustic, piano-laden musical meditations. But on Sept. 12, that was exactly the scene provided.

Mona la Phona, a female duo with more instruments on stage than people, opened the show with a handful of songs about love and loss, dancing and singing, meteorology and prognostication. The voices of the two women wove throughout the room and put all those facing the stage at ease. Meanwhile, the sound of clinking bottles and Trinkgeld behind the bar were the only peripheral sounds that one’s ear could discern. The audience members fell silent and their attention was divided between boats floating down the river and the music duo switching from accordion to violin, and then guitar to piano. One half of the pair joked that the stage was not much different from her bedroom; it was just missing the bed in the background. And the space did feel that intimate: a group of strangers becoming one with the inhalation of a shared experience.

After Mona la Phona descended from the stage, there was a short pause as microphones were reset and musicians exchanged places. Then Adam Evald stepped behind the piano to begin his set. His broad, dark hat dominated most of the space around him, and his curly blonde locks added a softness to the portrait of the artist. He began by addressing familiar members of the audience. “We know why you are here, to hear songs that hurt.” And there is something cathartic in Evald’s songs of heartbreak, but an undercurrent of hope is propelled by the beautiful melodies: from songs like “Leaving,” which gives vocal life to packed suitcases greeting a lover or a note stained with tears waiting to be found, to a song beginning with “lighting the candle once again” that seems to whisper of the repetition of failed relationships that welcome demons and endings to happen once again…and again. During this song, a rogue violinist made his way through the audience before settling in a seat on the stage behind sheet music that had been waiting for him. Evald questioned his audience after the final notes to make sure that it was alright with them, the truth in the subtle joke only adding to the charm. “That was not rehearsed,” he explained.

“Swimming in Romance” was next, as the violinist remained on the stage and shuffled through the sheet music. A discussion of how to start the song in sync was murmured between the two—a decision between a deep breath or an exaggerated nod of the head. The songs continued—a steady stream of emotions and compositions creating a trance that enveloped all present. Evald interjected between songs with jokes or simple commentary. “There is feedback. Get the feedback away from here,” he chuckled before plucking a few notes on the piano. “It is like you are one big person,” he addressed the crowd, before stepping off the stage and onto the floor for an acapello song fragment. There was a feeling of spontaneity to Evald’s performance, the impression that the songs were being influenced by the energy present in the room and the stream of consciousness being spun within his mind.

“I think it’s terrible to announce your last song, so I won’t announce that this is my last song.” A pause ensued as Evald laughed at his own joke. “But it’s the most hopeful song I know.” The words “I’ve got a feeling it’s gonna be alright” followed, a delicate work that gave life to the hopefulness that was only hinted at in the other songs, even if that hope is only for the next life. Evald finished the song and seemed to be closing for the evening when a woman came to the stage and requested another two songs. And then an audience member voiced a request for a Daniel Johnston song. “We will try our best,” Evald humbly offered in response. “By we, I am referring to me and my beer.” And with “Walking the Cow,” the set ended. The room sat in silence after a wave of applause. The DJ was slow to restart the playlist, perhaps still processing Evald’s set, or still lost in the emotions brought to the forefront, or perhaps just at the bar, getting another glass of wine.