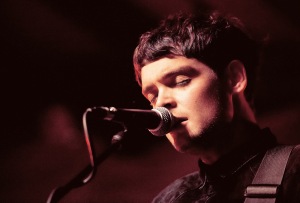 First We Take Berlin: a three-day showcase spread over 20 venues in Kreuzberg and Friedrichshain that will see well beyond 100 up-and-coming artists introduce themselves to the Hauptstadt. With specially curated lineups from local favorites like Berlin Community Radio, Radio Eins ,and Beatport, if you want a head start on the next year’s buzz bands, there’s no better place to look.

One such artist is Sivu—or James Page, to his parents. The London-based singer-songwriter formerly worked as a session musician, and now, after a string of EPs, is anticipating the release of his own debut album, “Something On High.” Expanding upon his delicate, highly descriptive “alternative pop,” Sivu’s live show has grown to encompass a full band—helping Page to fill this year’s increasingly bigger stages.

Calling Page’s home a few weeks before he’s due in Berlin, he’s quick to apologize for being slow to the phone: “Sorry! I was doing the washing up.” Fighting through a summer cold, Page is stealing some downtime before playing a string of festivals, including Reading & Leeds and Bestival in the UK: “I’ve already done some smaller festivals earlier this year, so I’ve had experience with playing outside and stuff, but it’ll be nice to push the live shows a little bit more.”

Sivu has already touched on a little multimedia: a direction that Page is extremely enthusiastic about pursuing. His first video, the quietly emotive “Better Man Than He,” was shot completely within an MRI scanner in London’s famous St Bartholomew’s hospital. The eery, mesmerizing shots of the inside of Page’s head propelled the single forward, and he took the opportunity to fundraise for the hospital along the way.

It’s curious that the “first thing [they] ever put online” should offer such a personal insight, given the nature of Page’s storytelling. The moniker “Sivu,” a Finnish translation of his family name, functions a little as a distancing method: “In the past I’ve written songs and it’s always been so much about me. This takes the focus off, in a way. You can put on more of a persona, especially live. Try something different, create more of a character.”

And it’s true that Page’s lyrics are more ethereal than visceral, hinting rather than telling. They may be personal, but not in any obvious way. Instead, we have a landscape of biblical cleansing, blind faith, and the complexities of losing yourself: “I am the water turned to bind / Tearing truth out of my mouth / Illuminate my body.”

This almost apocalyptic imagery has already earned Sivu a semi-religious label, one which he’s consistently refuting. “I never wanted people to think I was preaching,” he explained. “Obviously, obviously, I have no problem with religion, but a lot of people early on were asking ‘Are you religious?’ and I don’t want to lie, I’m not. Whether you’re religious or not, everyone can relate to these old stories, like Noah’s Ark [in “Bodies”]. It’s something I [find] really interesting, using biblical stories and trying to write about normal things in a different way.”

It’s an attitude that’s continued through his previous EPs and made its way on to the forthcoming album. “Yeah,” he said, excitedly “as a body of work it tells a story, with everything we’ve done so far.” The record has been a long time coming, too, and Page has found it hard to contain his excitement: “We were trying to hold back as many tracks as we could, but we kept making EPs and sneaking a couple of songs on there, or being like ‘oh no, I want to keep that one secret.’ It’s all getting a bit real now! I just want people to hear it; we’ve sat on it for so long.”

“Something on High” was produced by Charlie Andrews, a producer who first found fame through Alt-J’s prizewinning “Tessellate.” Page and Andrews became “best friends” several years ago, meeting during a recording session on which Page was playing bass “for a friend.”

He remembered, “I just really liked how he worked! And this was literally—I mean, by then I’d only written two tracks—I just went straight to Charlie first. It was way before Alt-J were big or anything, so I managed to sneak in. Now he’s not quite so easy to pin down! Then everyone came off the back of those first recordings we did, which was brilliant. We’ve worked through everything together in that respect.”

Just a month before the big release, Page clearly can’t contain his anticipation. How confident is he feeling? “More… quietly confident,” he quipped “The crowd response has been so good [so far]. We’re so lucky. I kind of feel if people like what they’ve heard so far, then it’s alright to say they’ll like the album! There [are] a couple of moments in there which they might not expect, but there [are] no massive curveballs… We won’t be doing a funk jam any time soon, but there’s still time!”