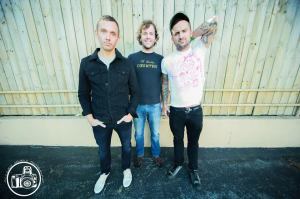 Earlier this month, The Lawrence Arms flew to mainland Europe for the first time in eight years. And on that flight to Europe, the three-piece band encountered another old-time punk rocker.

“We [shared] a flight with Ben Weasel,” said singer and bassist Brendan Kelly. “He didn’t punch anyone, that I saw, I guess. And I stood right next to him. We were both waiting to use the restroom at the same time and I knew who he was. I don’t know if he knew who I was, but, it was uncomfortable nonetheless.”

Upon arriving in Belgium, both the Lawrence Arms and Weasel played at the Groezrock Festival, and afterward, the former continued to hit up a couple more festivals, play a headline show, and open up for NOFX.

“We don’t do stuff that’s much longer than 10 days at a time. Just, you know, this is a really fun thing, it’s important to keep it really fun, and that means, like, sort of, governing our time stringently,” Kelly explained backstage before the final show of tour, at Berlin’s Astra Kulturhaus. “That is a recipe for older men coming to Europe to have a good time and get out while the getting’s good.”

It was also a good time for the trio–which also consists of drummer Neil Hennessy and guitarist and singer Chris McCaughan–to get a better sense of how the fan base in Europe has evolved during an eight-year absence.

“It’s been sort of a weird thing where…a good period of the time that we’ve spent not playing in Europe is also coincidentally a good period of time where a lot of people got to know who our band was and really start to like us,” Kelly shared. “It was sort of like we laid a lot of groundwork, and then we went away for like three generations of punk rockers, and now we’re back and we’ll see what happens.”

Of course, the Lawrence Arms didn’t come alone, as the band released its sixth full-length, “Metropole,” earlier this year, and finally had the opportunity to play the new songs abroad. The album is the group’s first in eight years, and with such a long gap since 2006’s “Oh! Calcutta!,” it was natural for many fans to wonder if the band was on hiatus, or breaking up.

However, the members have simply been doing other things, including but not limited to raising kids, living outside of Chicago, and performing in solo and side projects.

But then Kelly wrote a new song, and it sounded like a Lawrence Arms song more than anything else. So he sent it to McCaughan in Portland, who sent back a song he had written, and it opened up a dialogue that eventually gave birth to “Metropole.”

“It was born out of, like, a momentum,” McCaughan explained. “Hopefully it’s about urgency, you know what I’m saying? It’s like, I don’t think most Lawrence Arms records have ever been made…because that’s what you do. You know?”

Kelly agreed, saying that things for the band aren’t strategic in any sense of putting out an album, then touring, then restarting the cycle. Rather the time had come where it felt like the next step.

Musically, the new album is a Lawrence Arms album, no doubt about it. Granted, it’s a bit more mature, a bit more melodic, a bit less edgy, but there is no mistaking the sound for anything other than the Lawrence Arms. Lyrically, it grapples with big questions about location, about existence, about our relationships to the world around us.

“We’ve always been thoughtful about that kind of isolated guy in an urban environment…so it makes sense that we would write a record that was a little bit more honed in on that theme,” McCaughan elaborated. “I think unlike maybe old Lawrence Arms records which were very Chicago-centric, the idea was that we were writing a record that was much more a universal idea of person in world. That’s why I think the title vibes so well with the record, because it’s really about a universal city and not so much about a specific [place].”

Kelly agreed, sharing that, “one of the big things that we talked about a little bit when we were doing this was that, you know, this record should be as relevant to a Berliner, for example, as a Chicagoan, or as some motherfucker living in whatever the big city in Swaziland is, which I don’t know what it is.”

That said, the album is not only about living in big cities, but about living in general. McCaughan noted that in writing, the band attempted to get at how humans are all just trying to figure out how to exist and find meaning in what they do. Meanwhile, Kelly explained how the conclusions we draw based on these facts can be both depressing and freeing.

“I think it depends on the day, you know? And I think it depends on the situation. But I think that both of those interpretations are equally valid. I think there’s a liberating freedom in knowing that everything that you find to be so important is ultimately not that big of a deal, and I think that at the same time, if you’re, you know, struggling to do something that is resonant, that can also be pretty disappointing,” Kelly said. “It’s day to day and it’s minute to minute, it’s like, fuck. Maybe you have a friend, or like a place that you go all the time, or something like that, where, you know, sometimes it’s like ‘aww, there’s Beth, she’s the best, she makes me so happy!’ And then sometimes you’re like, ‘ahh there’s Beth, she’s totally bumming me out right now,’ you know? I think it’s more like that. This is something that just exists, and it’s universal truth, I mean, it’s like this universe is so vast and so huge, and even the world is so big. And there’s so fucking many people, and we’re ultimately insignificant in the cosmic scope. And that can be a great thing or a terrible thing, depending on how you spin it…[but] there’s no real way to gauge your own existence.”

At this point, McCaughan took the lead, noting that figuring out how you fit into the world depends a lot on how you interact with those you encounter in your every day.

“The way I try to gauge mine existence is by being a kind person. Like more and more, that’s what it’s about. If you can be nice and do your best to not get too far ahead of yourself, not get too far behind, you kn0w, in terms of how you perceive your existence, you know? Then you’re succeeding, to me,” McCaughan said. “Because you know all the cliches of life being short or life being nothing or whatever, ultimately all that shit doesn’t matter, because what matters is that there’s people who like you, they like having you around, and you like being around them…whether I made something great they don’t fucking talk about in 1,000 years or not, I’m not sure how much that really matters.”

Now, in spite of six albums under their belts, along with having been signed to two of the most prolific mainstream punk rock labels, Fat Wreck and Epitaph, the band has established that leaving a legacy behind doesn’t matter much. Even so, is there anything else the members have on their bucket list?

“Ah, fuck, I mean, when it comes to playing in a band, we’ve done way more than I ever expected to,” Kelly admitted.

“I guess the only other thing would maybe be, like, television?” McCaughan countered, setting off a discussion about what the Lawrence Arms sitcom might be like, or how it would feel to play on Stephen Colbert’s new show. Yet at the same time, none of them would be disappointed if those things didn’t happen.

“That’s kinda the cool thing about like, you know, pissing away your 20s traveling around the world in a van, is like, you kinda get to do, maybe not on the same level that you imagined, but you kinda get to do everything,” Kelly said. “[But] I think that what’s always been most important for us is that the songs we write resonate with the three of us, and that our fans like ’em too, and you know, and that we can just like, keep putting out music that we think is cool and not embarrassing.”

“And the other thing that’s important is that we, like, do this shit on our own terms. I think that’s the way we’ve tried to always operate,” McCaughen added. “[Also], as a creative person, if you’re not looking ahead, if you become satisfied…that’s where you making a huge, critical mistake. And it’s not just about songwriting…it’s all about the risks you take as you move forward, not about resting in some sort of satisfied state of what you made.”

And therein lies the biggest challenge for the members of Lawrence Arms, which is staying true to themselves while also remaining relevant to their fans. When asked what relevant means to them, Kelly elaborated, saying that it’s writing good songs they can be proud of.

“That’s like the heart and soul of what this is about. If I felt that was easy, or if I felt like Chris thought that was easy, I think that it would be like, ‘oh we’re fucking this up completely,'” Kelly said. “I mean, I could point to a lot of bands and I could name a lot of bands that I will not name that I think used to write great songs. And they got old and they got lazy, and started writing shitty songs. And I think that…if writing great songs is ever not the most challenging part of this, then that’s a problem.”

Kelly paused, thinking it over a moment, before launching into an anecdote from tour.

“Last night we were playing in Cologne, and there was this dude up front and…he was very obviously having the best time of his life. He was having the time of his life and it’s like, to be able to cruise halfway around the world and do something that stokes out that guy as much as things used to stoke me out to the point where we engineered our whole lives to do this in the first place? Because, I mean, that’s the thing. This all comes from that love of music and getting touched so viscerally that it’s almost like a whole different thing…to be able to see that in somebody else from the fucking weird songs that Chris and I were sitting around in our bedroom writing?…That’s an awesome feeling. It can’t be overstated.”