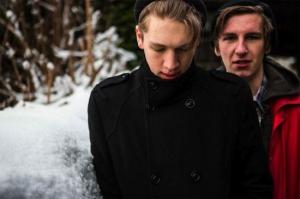 Noisy British brotherly duo Drenge has stirred up a storm during the last year. Brash but intelligent, verbally the band pulls no punches, and the shakily filmed homemade videos are as brutal as the song titles. Tracks like “Bloodsports,” “Face Like a Skull,” and “People in Love Make Me Feel Yuck” have garnered Drenge an uncompromising reputation, and true to form, despite the runaway, prize-winning, critical success of the band’s first album, Drenge remains completely unfazed.

On a phone call from the depths of Switzerland, Eoin Loveless, the vocals and guitar to brother Rory’s drum kit, explained, “Yeah, I really don’t care about all this award stuff, or like, being in music magazines and that, but every so often you have to go: ‘stop being a dick, this is everything your 16-year-old self would never believe is happening.’”

Having grown up in a rural northern town a long bus ride from Sheffield, Loveless talked at length of the importance of a strong and creative local community. Distancing themselves from the “moves-to-London, leather jacket, hair cut bands” who play for the hype, “get written about, and then fade into obscurity,” he enthused about the need for regional bands to find their own identity. “If you build up a network, support each other, go to each others’ shows, then it becomes a pleasant place to be making music and hanging out. In terms of just an experience, it’s a rewarding one.”

And when it comes to the business of music, if a band does break through, geographically speaking, it can be a really great thing for the local scene. Cheerily, Loveless likened this to “lifting up a log and finding all the worms underneath. But nicer.”

But while the brothers’ debut release, “Drenge,” expounds viciously on their own small-town boredom, and the frustration and aggression that comes of it, it touches a nerve that’s broadly felt.

“A lot of people living in cities and stuff also really ‘got’ the record, because they can’t go out as it’s too dangerous where they live, or there’s just nothing to do. We were in America recently, and the life that you have until you’re 21 just sucks–it’s insane, I’d be writing a lot of angry music,” he said. “But it’s not like…winning all these awards, or one of them, and then touring the world and all this stuff, it doesn’t change you or the way you see the world. I’ll always be fucked off at stuff; there’ll always be something to write about.”

Loveless, although eloquent and extremely polite, definitely still sounds fucked off at a lot of things. During the course of the phone call, he verbally takes down lazily journalistic comparisons to other two-piece bands, the cogs at work in the world of labels, bands who can’t “reel their ego in,” unnecessarily long songs, and the incessant tagging of Drenge as grunge.

“We’re just not a grunge band at all,” he sighed.

Meanwhile, he shared that Drenge’s presence on social media, semi-documenting the band’s current European tour, is anything but a PR move.

“We’re really bored in the van so there’s not much else to do than freak people out online. We tend to be really sarcastic but we’re often taken at face value and people can get worryingly upset about stuff that doesn’t matter. We hate that whole side of ‘marketing,’ but you have to do it, so we try and be as inane as we can.”

Loveless then debunks a number of lies he’s told recently. It turns out that the next album will not be full of 12-minute epics, as he told one interviewer while “really tired, stressed, and about to go on stage. I just said it to weird him out.” Nor will it be full of ready-for-radio mainstream: “Yeah, that guy was just a bit of a dick, so I told him we were going to go way more commercial and showy. I just didn’t want to give him the answers he wanted.”

It’s an aggressive kind of nonchalance, an attitude that certainly fits Drenge’s sound, but one that sits uncomfortably with Loveless himself. With intimidating lyrics like “make you piss your pants/ I wanna break you in half,” he dissolved into giggles when asked if his pick-up lines work similarly.

“Err…obviously I don’t want to break anyone in half. People in love don’t actually make me feel yuck. It’s like the singer from Los Campesinos said, it’s just the equivalent of saying iPads are shit, but really wanting an iPad and not having one,” he said. “It just comes from that sarcastic, like…I’m not that guy.”

He turned stern. “It was seriously the only way I could express myself, and be visceral, and straight up, and just tell people how I felt about them, or that shit job. Really, I’m not aggressive, I just…wanted people to see me as aggressive, perhaps.”

‘The next record is hopefully just as self-deprecating, and less, err…well a lot of it’s written from a woman’s perspective, which is probably really misguided of me. Hopefully it won’t be an error of judgement. The whole Operation Yewtree, Jimmy Savile thing really fucked with my head. I had a really weird couple of weeks when all that came out. I was just shocked.”

Given his track record for truth telling there’s no real way of knowing how the next record will shape up. What is for sure is that Drenge will play an absolute blinder in Berlin. As Loveless shook off the morbid turn taken by the conversation, he asserted “tonight will be a good show, I just know it.”

Drenge plays tonight at Comet Club in Berlin. The show begins at 20.00.