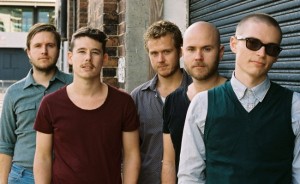 It’s been five years since Australian indie-folk quintet Boy & Bear formed, and it’s safe to say the group has finally come into its own. That’s not to say the band didn’t do well for itself in the beginning, but as with most things, there was a required period of growth and maturity that simply comes with time. And now is that time for Boy & Bear.

In contrast to the first couple of releases–2011’s debut album “Moonfire” and 2010’s “With Emperor Antarctica” EP–“Harlequin Dream” is a much more realized effort than its predecessors.

“It’s definitely got a new life and…less imagery, and much more, I guess, authenticity, and simple kind of lyrics,” said Gavin, explaining how the group has gradually evolved from fictionalized storytelling to more and more personal lyrics, giving the newest album more of an autobiographical edge.

And in addition to lyrical progression, Gavin also noted that the way songs are written has changed over the years; where Hosking once wrote the skeletons of songs and brought them in to be worked on, now the other members feel more comfortable contributing their own ideas, which results in a wider variety of musical territory to explore.

“There’s so much more to a song than the lyrics. There’s so much to create and so many parts and roles to be filled,” Gavin shared. “So what everyone else is bringing is another piece to the puzzle that, when we do get to that point where the song stays in the band room or we’re all writing it, it’s a real sort of democratic process and everyone’s idea is on par.”

That said, there is still a difference between what ends up on the album and what fans here in the live setting.

“We don’t try and play the songs exactly as they were recorded. We try to keep them in a way that we feel like doing every night, rather than try to be metronomic,” said John. “The songs take on a different life when you play them live. In some sense it becomes harder to listen to the record because you wish you’d recorded them [differently].”

And though the band can’t go back and change the music, the members can certainly implement new ideas on future songs.

That’s not to say the five are without their struggles, both in terms of band-related issues and as a result of the sibling-like relationship they share with one another. But the members are also no longer “green,” and that has provided them with additional insight into the industry and how to navigate it.

“When you’re new as a band, I feel like you have this optimism about what you can do,” Gavin said. “You get by, I think, a lot on that naive [approach].”

He elaborated, sharing that at some point, it’s important for an artist to be aware of his or her own strengths and shortcomings, and adjust the approach accordingly, in a way the suits all the members.

“You’ve got to find other ways to find the vibe sometimes,” he said.