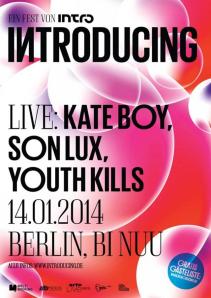 Days before the latest installment from Introducing, a warning sign was displayed: come early to avoid disappointment. So, on Tuesday, as predicted, an agitated queue wound itself around Schlesisches Tor U-Bahn hours before doors were due to open.

For those not in the know, Introducing is a series of shows masterminded by Intro Magazine and designed to showcase the best under-the-radar bands, in an intimate setting, and all for free. Signifying perhaps the most popular lineup of the season so far, Bi Nuu looked set to burst under the influx of cold, impatient fans.

This month’s “theme” was evidently shades of synth, and the first band up, Youth Kills, came with some serious synth-pop credentials: members of the much-hyped London-based duo are both sons of original members of the kings of synth themselves, Duran Duran. Taking to the stage with questionable clothing choices but a decent helping of confidence, they ripped through the packed venue with their anthemic and attitude-laden alt-pop. Catchy but admittedly cheesy lyrics (along the lines of, “if you’re gonna do it, the time is now”) ensured an easy singalong. and the expanded live setup added a depth and drive that went down well with the clearly familiar crowd. Fun, but far from original, Youth Kills sadly is not Duran Duran, and it’s a shame that the band’s heritage sets the bar so high.

Next up, Son Lux. Clearly anticipated by the fidgeting, palpably excited crowd, cult hero producer Ryan Lott has carved a name for himself with some stellar collaborations and his unique brand of hip-hop infused electronica. Son Lux is so much more than that, though. His music resists definition, and the evening’s performance was untouchable. With delicacy and precision, the crowd was steered through a soaring emotional spectrum, sampling predominantly from recent album “Lanterns.” Lead single “Lost It To Trying” is a solemn, nostalgic beauty of a song; despite sounding misleadingly loose and relaxed, it’s startlingly clear that every single note is crafted and painstakingly placed. The set read like a journey, inhaling and crashing down into a wall built from layers upon layers of sound: itching, glitchy, and infectiously danceable. The effect was trance-like, hypnotic, and deeply personal, and there was a stunned silence when it swept to a close.

A tough act to follow, but the evening’s headliner was Kate Boy, a quartet named singularly to reflect the androgynous, shadowed persona of the band as a whole. Three parts Swedish to one part Australian, there’s clear influence from the synth-based drama of the likes of The Knife, Robyn, and Niki and the Dove. Driven by the tension between soaring vocals and the theatrical percussion played out on both sides of the stage, Kate Boy sounded both rustic and achingly contemporary. Glitteringly angular, it was a commanding, captivating performance. There was an almost-festival feeling in the still-crowded Bi Nuu — no easy feat on such a cold evening — and when Kate Akhurst (lead vocals) raised her arms in victory, it was easy to visualize this band becoming a firm favorite on sun-drenched festival stages this summer. The closing song, “The Way We Are,” is an ode to Tempelhofer Feld’s “specialness,” and a heartfelt, celebratory close to a night that demonstrated exactly what Introducing is made for.