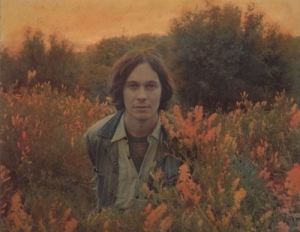 Washed Out – Photo by Shae DeTar

When Ernest Greene, the musician better known as Washed Out, sat down to write the follow-up to 2011’s “Within and Without,” he did so with an active focus on producing something positive.

“It’s really easy for me to write, like, these kind of bittersweet….melodies,” he shared during a stopover in Berlin this October. “There’s always a sort of a feeling of it being positive in some way, but it also has this very melancholy kind of feel.”

To do this without making it feel forced, cheesy, or even melodramatic, Greene treated writing the album like a 9-to-5 job, in which he sat in his studio during the daytime and wrote with a focus on sunlight and the outdoors.

The result is “Paracosm” — nine tracks spanning 41 minutes that have an overall feel-good vibe.

“It comes from a very real positive sincere place,” Greene said of his sophomore release.

In addition to this mental state, Greene also consciously wrote with his band in mind, hoping to capture a more adventurous and loud sound.

“[Before getting a back-up band], it was a lot more, kind of, dance music,” he explained. “You know, I wasn’t like a real DJ or anything, but the flow…was more like repetitive stuff, where now it’s definitely more like a rock thing.”

This focus on writing for a band also comes from a place where Greene associated a certain amount of inauthenticity with his live show and wanted the band in his head, the band on the album, and the band on stage to match up.

“I felt like, for a long time, when we first started as a band… [that] because the first couple of records weren’t, like, made with the band in mind at all. It just felt like we were like a Washed Out cover band or something,” he shared. “I always felt really weird about that, and so with this new record, it was almost like in my mind I was like picturing all of these players. Hopefully it sounds just like the album.”

Of course, over the past half decade, the music isn’t the only thing that has changed. In fact, Greene admitted he was particularly naive when he first got started, but that he quickly learned how the music industry works.

“I remember the first time [when] I turned the record in and I thought that meant like, it was three months until the record came out, so I thought it would be like three months of doing nothing,” he recalled. “But actually that’s when just all the deadlines just start to happen and so it’s a lot of work.”

As a result, with “Paracosm,” he had a better idea of what he was getting into, which motivated him to work harder to help put all the smaller details into place.

The album came out in August, and since then, Greene’s schedule has been busy with touring, something he enjoys just as much as he does staying home and being domestic. But he relies on the cyclical nature of writing an album, releasing it, touring it, then coming home and starting all over again, an ever-changing yet predictable routine that gives him some variety in his life.

“It’s nice to be traveling again,” he admitted. “I took about a year off…working on the record. It’s like I never leave the house, just stay in my pajamas all day, work on music. And, as you can imagine, it’s like the exact opposite of this, so this crazy shift happens.”

After the holidays, Greene has a West Coast tour planned for January and February, and then perhaps at some point in 2014 he will begin work on album number three. As for the direction, he is not entirely certain, but he has a few basic ground rules in mind.

“I never wanna do the same record over again,” he said. “I’m getting to a point now where I’m most excited about going back to the old style of writing, where it’s like there’s no thought of, like, performing the songs at all. It’s just kind of putting together the best stuff I can do without any expectations.”