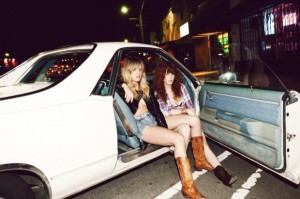 “There are people who just see a picture of us, and have immediate hatred. It’s the sexuality, it’s the ‘sexy woman’ thing,’” explained Julie Edwards, drummer of rock’n’roll two-piece Deap Vally. “I think something that we’ve realized in the process of doing what we do, is that even in 2013 there is a lot of…I don’t know what the word would be. Puritanism. Prudishness.”

For a band that released its debut album only a few months ago, Deap Vally is already shrouded in urban myth. Is Marilyn Manson really a groupie? Just how much do they like knitting? With a cult following and the sexiest riffs this side of the ’70s, Deap Vally stands as a rip-roaring raised middle finger to your misconceptions of women in rock. With razor sharp songs full of one-night-stands, lechery, liars and cheaters, Deap Vally will take you for a ride that’s exhilarating and utterly uncompromising.

Edwards met Lindsey Troy (guitar and vocals) whilst running a crochet class. It’s the kind of humble beginning that becomes the stuff of rock’n’roll legend.

“I just thought she was really cool, so I kept going in there while she was working, and she’d be forced to hang out with me,” Troy confessed. “When she brought up the idea to start a girl band, I was like FUCK yes. Let’s do this.”

But does it get annoying, constantly having their gender pointed out to them? They laughed. Troy rolled her eyes.

“‘I think it works for us and it works against us,” added Edwards. “It’s so noticeable to everyone and it is kind of gimmicky. We get a lot of attention…which is good. But it does get frustrating. I think as women, we’re setting a precedent. Our overt, sexual way of expressing ourselves. The way we dress. I think that usually women in bands play it down, because they feel that they’re in a man’s world. And, since the music industry really is a man’s world, it doesn’t necessarily make sense to turn up the femininity.”

Troy leapt in, noting that “as women, as performers, we’ve chosen to accentuate our femininity on stage. But you can also do the reverse of that…I feel we’re the same as Savages. I was talking to Jenny [lead vocalist], and she has a shaved head. I was like, ‘oh, 10 years ago, I had a shaved head.’ She said, ‘ten years ago I had long hair like you.’ It just doesn’t matter, really. It’s six of one, half a dozen of the other. It’s the same thing. We’re both making the same statements for the same cause, in different ways.”

With musical influences ranging from the swagger of Led Zeppelin to the gravelly blues of Janis Joplin, both women draw on a love of classic rock and strong female voices. Troy listed PJ Harvey, Courtney Love, and Joan Jett, among others as her inspiration.

“[It’s] a real mishmash of ’90s and classic rock,” she said. “I was always drawn to female musicians. There’s definitely a theme of me looking for female vocalists. Gwen Stefani, Courtney Love, Jewel–totally different genres, but women with strong personalities.”

It’s easy to believe and seems entirely appropriate given Deap Vally’s unapologetic, confrontational stance–both on and off stage.

You might think it incongruent with their image, but the pair certainly haven’t traded in their knitting needles. They both light up as they show off several Deap Vally emblazoned woolly hats that Edward’s been knitting whilst cooped up on their tour bus, and shared that they even held a crochet tutorial at yarn shop Wollen earlier in the day. They certainly couldn’t care less if it fits with the typical rock’n’roll lifestyle, and definitely enjoy the perceived contrast between such a “homely” pastime and their exuberant performances.

Despite having both visited Berlin several times, last week’s performance was the very first show in the Hauptstadt. The night before, they were in Copenhagen, where Troy excitedly described their first ever second encore.

“It was amazing! They wouldn’t quiet down,” she said. “We did ‘Baby I Call Hell,’ and they just kept singing; they wouldn’t stop!”

All Deap Vally asks of an audience is that they’re “rowdy and participating.”

“And sweaty,” interjected Edwards. “Apparently last night everyone was making out. Which is awesome. That makes me really happy. That’s the ultimate.”

The venue wasn’t quite full when Deap Vally played Magnet later that evening, but it was as sweaty and passionate a crowd as anyone could ask for. The pair were loose, relaxed, and firmly in control, clad in their uniform of supremely short shorts and impossibly huge hair. Their intentions were clear and the delivery was right on point: suggestive, snarling vocals underpinned by driving, relentless beats. Beer flew over heads and hands were raised as an enraptured crowd, men and women alike, chanted back Lindsey’s words.

One could only imagine they’ll be more than satisfied. Deap Vally’s brazen but carefully considered confrontation of exactly what it means to be a “girl band” in 2013 leaves listeners with no doubt that we’ll be seeing a whole lot more of Troy and Edwards in the coming years.