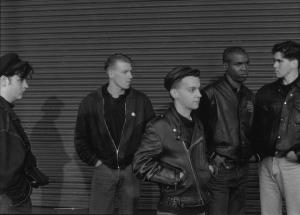 Thirty years ago, The Brilliant Corners formed in Bristol and helped to foster a genre of music known as indie pop. In the years since, the band has been inactive for two of those three decades, yet it still managed to retain a following – enough, even, that it demanded a reunion.

However, when the idea was first introduced, lead singer David Woodward admittedly had his doubts.

“I think that 99 percent of reunions and groups getting back together is a disaster,” he shared. “So at first I was not keen at all. I have not been for over 20 years!”

And even with drummer Bob Morris being persistent with pushing the idea, it wasn’t until the 48-track compilation album, Heart On Your Sleeve, came out earlier this year that Woodward was convinced.

“I felt many of the songs [on the album] sounded fresh and exciting,” he said. “So it was a kind of [a] ‘now or never’ moment.”

Of course, after 20 years of not playing Brilliant Corners tracks, there were some things that needed extra attention – namely remembering how to play – but also figuring out what songs were worth dusting off and polishing up.

“Working out which songs to do was the most difficult thing. [There was] no way we could rehearse 50 songs,” Woodward shared. “[Also], remembering the chords and the lyrics took me 3 months, but [even so], the rehearsals sounded great from the start.”

Fortunately the songs that made the cut remain meaningful to the band, even all these years later.

“The good thing is that the songs we have chosen to play sound really fresh and positive,” Woodward explained, referencing love as a central theme. “Lyric-wise, some of the songs still have meaning and relevance…and the meaning of love songs remain the same whenever they were written!”

Initially, when the band formed in 1983, they were some of the forerunners of indie pop, and although they didn’t make an appearance on the famous C86 compilation, Woodward counts The Brilliant Corners as members of the scene.

“C86 is essentially a label for a lot of indie guitar bands of that time who were influenced by 60s pop, punk DIY ethics, and The Velvet Underground,” he said. “[Naturally], I would include the BCS in this.”

As inspiration to even be a musician, Woodward cited bands like Gang of Four, The Jam, and Echo and the Bunnymen as his initial inspirations, later followed by Orange Juice and Josef K.

“But before all that there was pub rock, [like] Dr. Feelgood, which then made me listen to 60s R&B,” he said. “All this laid the foundations; when I read about these artists I realized they were freaks/outsiders like me, so if I could play music, I might feel less of a freak and be cool! Later The Velvets and Dylan [also] became regular visitors to my bedroom.”

Since The Brilliant Corners decided to take the band out for another spin, the members have played two high-profile gigs, first at Scared to Get Happy in June, and then at Indietracks in July, with another appearance scheduled at Berlin’s Popfest next month.

“The reaction was amazing,” Woodward said. “People singing along, a real emotional connection with the audience. At Indietracks there were a lot of young people who had never seen us and were really surprised at how good we were! So a mixture of old and new fans, which is great.”

In explaining the presence of new and younger fans after all these years, Woodward pointed to the accessibility of the genre as proof.

“It remains small and niche, as not enough of the bands from that era really had huge global success, apart from The Smiths. There were also a lot of bloody good songs released at the time, so it is natural that younger bands will look back at this time with fondness, and an ‘indie scene’ continues,” he explained. “I would also say a band like Belle and Sebastian ensure that more people are aware of an ‘indie scene,’ and if they get more interested, they go back in time and arrive at C86.”

Of course, with a solid fan-base all these years later, there are a lot of questions about what this reunion means. Will the band break up again soon? Can fans expect new material?

But if you were to ask the members, the answer would be that there are no plans.

“The idea is that we will be available to play for a year – until June 2014. Then I go back to the solo projects I am working on and The Experimental Pop Band,” Woodward said, referencing a band he started after the break-up of The Brilliant Corners.

However, he did specify that his ideas of what will happen aren’t the be-all end-all.

“Mind you, the rest of the band might have different ideas,” he noted.

The Brilliant Corners will play at Grüner Salon on Saturday, Oct. 5, in Berlin as part of Popfest Berlin 2013.