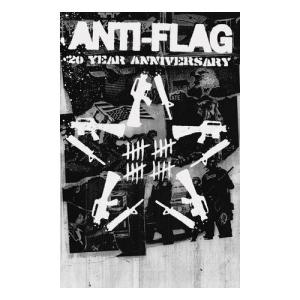 An hour before starting time, a group of fans anxiously awaiting the evening’s show gathered outside of Magnet Club. The band’s big black tour bus was parked out front and several people peered in, attempting to see through the tinted windows, but to no avail. Naturally, Anti-Flag t-shirts were the chosen wardrobe for the majority of the people assembled on Falckensteinstraße, which was only logical, as that night marked the 20th anniversary of the band, and Anti-Flag had come to Magnet to celebrate the fans who had become family over the course of two decades.

After the crowd had been patted down and filed into the venue, the show started. The opening band was Idle Class, a punk band from Münster. Perhaps the most striking feature about the members, even before they started to play their instruments, is how genuinely happy they looked. Each member emitted positive energy and a seemingly sincere desire to be performing for the audience that stared back. Throughout their set, the guys in Idle Class managed to expertly weave together rhythms reminiscent of The Movielife, including acapella song endings and an appropriate number of breakdowns to facilitate the mosh pit.  The band even had a mini-circlepit on stage as the members pushed each other around and danced within their respective parts of the stage. They ended the set with screaming the lyrics: “It’s not an ending, just a change of purpose.”

Once Idle Class left the stage, the roadies entered and started to clear the way for the headliners. The house music came up and somewhat out of place Blondie tracks blended with the smalltalk, the orders at the bar, and the checking of mics.

Once Chris No.2’s megaphone was in place, the audience began to pay closer attention to the stage. They knew Anti-Flag was almost ready. As soon as Justin Sane, Chris No.2, Chris Head, and Pat Thetic took their places, the crowd surged forward with hands in the air, screaming at the top of their lungs. From “The Press Corpse” all the way through to  “Fuck Police Brutality,” no one rested. Sweat was visible on everyone in Magnet from the girl in the short skirt pressed against the stage to the guy in a tank top moshing with all of his might and even to the older woman sitting at the bar quietly enjoying the show and her beer.

After singing “So stand up, step out, step out to the new sound” – lyrics to a song off Anti-Flag’s newest album – Chris No. 2 paused and looked at the audience: “I ain’t gonna lie Berlin. This is a really good fucking time.” Smiling, he picked up his instrument and began to play the next song.  That feeling was palpable. The people present in the venue had formed a sort of family and community; that environment was sustained through covers of the Dead Kennedy’s “Nazi Punks Fuck Off” and the Ramones’  “Sheena is a Punk Rocker.” Anti-Flag is recognized time and time again for its belief in being kind to those around and that was echoed in the mosh pit, with members stopping to pick people up when they fell down; in fans bringing water to those who were dehydrated; in the feel-good vibe that was contagious throughout the whole venue.

After the last song and a thorough introduction of every member of the touring crew, the house music started to play and a soundtrack of Feist escorted the audience out into the misting skies of Berlin.