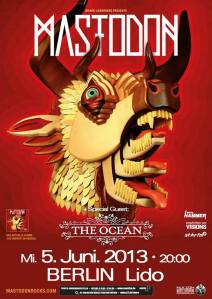 The line outside was wrapped around the block – a human sea of black ink and black clothing. Two men with shopping carts collected the empty bottles of beer that everyone seemed to be chugging as they awaited entry. The thick black letters on the marquee announced that the night’s show of Mastodon and The Ocean was sold out, but that didn’t stop people asking for tickets and trying to find alternative forms of entry.

The setup for The Ocean was impressive, in that it was a bit more intricate than one expects at a metal show. But then again, The Ocean is anything but a stereotypical metal band.  From their penchant for concept albums to their cinematic live shows, The Ocean is continually surprising.

Blue and green lights highlighted the band members while a projector on the back wall of the stage showed film clips of the ocean and other aquatic elements, plunging audience members into another world.  The band did not interrupt the set with pauses or on-stage banter; instead there were instrumental interludes as the singer, Loic Rossetti, chugged water to refuel. Robin Staps, guitarist and founder of the band, methodically played obscure guitar lines that helped the audience further lose themselves in the journey into the depths of The Ocean. At times it was hard to hear to hear Loic’s vocals, though the strain visible through the veins popping in his neck and the sweat dripping from his brow showed that it was not his fault.

The blue and green lights abruptly changed to red and orange as the band launched into the last song of the set, “Benthic: The Origin of Our Wishes” – an appropriate closing, as it is also the last song on their newest release, Pelagial. “There’s no one here/No one can harm them here/Oh God…”   Rossetti screamed as he hit the cymbals and the crash of the metal blended with the bell tolls of the guitars. The entire band rhythmically collapsed with the pounding bass notes. And then it was suddenly over. The band did not linger on stage except for Staps, who held up his guitar triumphantly as the audience cheered.  Earlier, the audience had not been particularly active and seemed jaded, with arms crossed and heads reservedly nodding with the beat, but their cheers at the end signaled that their musical thirst had been quenched.

A long pause was endured as the stage was set up for Mastodon. A quick glance around revealed that the only difference between the crowd inside of Lido and those in the line outside before was one less layer; the jackets came off , revealing bare arms holding with beer in plastic cups rather than green glass bottles. The sound of the chain pulleys lifting the lights in preparation for the headliner helped to build the anticipation. One stage tech in a Municipal Waste shirt and the other pledging his allegiance to Metallica frantically ran from one side of the stage to the other.

“Hello, friends,” Troy Sanders said as the band took the stage. The set began and started off a bit slowly. Mastodon seemed to need a bit of time to warm up and find its energy, but the crowd certainly did not; they rushed forward to the stage, crushing anyone unwilling to move out of the way. Bill Keliher looked a bit out of place on the stage in a dress shirt and slicked back hair – handsome and dapper in comparison to the t-shirts and sweat-soaked hair of the other members. But such a contrast didn’t keep the musical sounds from blending and creating the wall of sound that one expects from Mastodon. Keliher’s head kept time like a human metronome as he wailed away at the guitar on song after song. Meanwhile, Brent Hinds didn’t seem to be that present during the set; his movement was subdued and his vocals seemed a little flatter and quieter than need be. But Sanders more than made up for that, his hair wildly flew about him as he screamed through the set, from “Dry Bone Valley” to “The Wolf is Loose.”