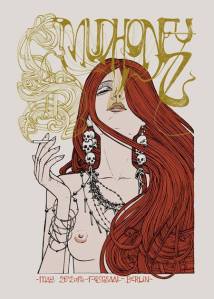 Mudhoney is one of those names that, for many, evokes the image of grunge rockers in the Pacific Northwest with long, unkempt hair clothed in plaid shirts that are matched with ripped and faded jeans. When brought up in a casual music chat, some people recall that Kurt Cobain cited them as one of Nirvana’s major influences. And still, there are others who can only hum a few bars of “Touch Me I’m Sick.”  Regardless, people that fit into all of these categories, and more, turned out to Festsaal Kreuzberg for the Mudhoney show this past Sunday.

One could never have guessed by the energy exchanged between the band members and the audience that Mudhoney has been active for nearly thirty years. The distorted guitar pairings of Mark Arm and Steve Turner dispelled any misconceptions one might have had about seeing an aging band. The band is far from being irrelevant; the new songs from the latest studio release, Vanishing Point, inspired just as much dancing and jumping as the old favorites. The set took a little while to gain momentum; perhaps this was due to the list of European dates before the band arrived in Berlin or perhaps the members just needed to feel the audience out and see what kind of night they were in for. But as Arm sang the words to “Crooked and Wide,” the veins began to pop out of his neck and he started to stealthily pace around the stage – his movements illustrating the hold the music had over not only him, but the audience as well.

Mudhoney didn’t hold back before jumping into tracks off the newest release. Arm shed his guitar and faced the audience with only his vocals.  A sleazy track with a bass line began to slink around his vocals. The sweating individuals received a break during this song; they seemed to listen and actually process what Arm was singing (or perhaps they were just resting their lungs from the veil of smoke that had formed in Festsaal’s ground floor from chain smokers and marijuana imbibers).  After the last chord was struck, the band left, but no one was fooled into thinking that the last song had been sung.  The pause was a bit long though, and the band did give a noncommittal word of thanks to those in attendance. The guitar tech remained: tuning guitars and readjusting mics. And the crowd continued to cheer, to clap, and to gaze expectantly at the stage. Obviously, Mudhoney came back to the stage, led by Dan Peters.

Rejuvenated after the pause, Arm was in full force. Sweat gathered on his forehead and dampened his blonde locks that seem to not have changed during his entire musical career.  His black v-neck t-shirt and faded jeans made it seem as though this concert was the result of a time travel mission to the height of grunge. From “Into the Drink,” to a cover of Black Flag’s “Fix Me,” to the end of the set with “Tales of Terror,” the crowd and the band both showed no desire to stop. There was a short respite during “In N Out of Grace” for Guy Maddison to show off his bass skills and solo alongside Peters.  During this moment, Arm seemed to forget some lyrics, but the band laughed it off and added an extra cycle to the verse so that Arm had a chance to redeem himself.  Peters searched for his full beer in a line of empty bottles on the speaker nearest to him, took a glug, and exited the stage.

And that was the last time they left the stage that evening. The house lights came on quickly and didn’t leave enough to time for a chant of “one more song” to begin. The sweaty masses began to file out with plaid shirts clinging to their backs, and a curly redhead not much older than twenty and a greying man who can’t under the age of forty exchanged glances and smiles as they posted up at the merch table to permanently commemorate the evening.