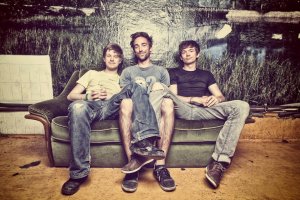 A lot can happen in four years, and in the case of British band TTNG – formerly known as This Town Needs Guns – that includes a member change, a name change, and, at long last, a new album.

The trio, which was once based in Oxford, but is now spread to Dorset and Norwich, still consists of its founding member, Tim Collis, and his brother Chris, who joined the band two years after its formation. But the original singer, Stuart Smith, and bassist Jamie Cooper, quit last year, leaving newest member Henry Tremain to fill in both of those roles.

Of course, although they adapted, the lineup change wasn’t necessarily easy, to say the least.

“It’s had a few problems, obviously, and we’re still trying to work out how to play some songs, cause on the album there’s four of us,” Chris explained. “[But] we feel a lot more positive about it now…I think it balances really well.”

Tim agreed, sharing that although they miss the former members, the simple fact is that it is easier to coordinate the lives and schedules of a lesser number of people.

“But also, I think the three of us now are definitely all on the same page with kind of trying to make the band, you know, a career as best we can. And we’re kind of in the position where it’s all very similar deal for us, so, you know, we’re not married or having kids or anything just at the moment,” Tim said. “We’re in the same place.”

Recently, the band also came out with an announcement that, along with a new lineup comes a new name. Fortunately, it was simply shortened, from This Town Needs Guns to TTNG.

“One of the reasons that we took TTNG is because that’s what most people call us anyway, so it’s like, that far away from the old name,” Chris said. “As we just released a new album and it’s all about change and, you know, we’ve got Henry and we’re now a 3-piece, we figured that by shortening the name, you know, that was a good time to do it anyway.”

Not only that, but in the shadow of international stories of increasing gun violence, the group felt that a name that was created in good fun no longer felt relevant or appropriate.

“Although we were kind of having the discussion of changing the name on and off, we hadn’t really sat down to,” Tim said. “[But] there were a lot more cases of gun-related violence and incidents and so on around the world, that actually started cropping up more and more, and so it was kind of, you know.”

Shortening the name also makes it easier in a way that doesn’t cause the group to have to start from scratch in generating a following.

“We just thought it was a good time to do it, and nothing too drastic, ’cause obviously we worked hard to build up a fan base and changing it completely, I think, would’ve kind of alienated a few more people,” Chris explained.

Just a few weeks ago, the band came out with “13​.​0​.​0​.​0​.​0,” a follow-up to 2009’s “Animals.” And although there was admittedly quite a gap in time between the first and second albums, the TTNG guys admit that it was ultimately a good thing to spend that time and money on putting out a proper release.

“[With the first album], we didn’t have any time, to be honest, we didn’t have any budget, and we were lucky that this time, you know, we had those things on our side and we lucky enough to get Ed Rose to fly out from the states and come over and produce the album, which was great. So it was all a bit more of, kind of a step up. A bit more serious, but in a good way,” Tim shared. “It was good to have…his input, and his experience, and his talent, really, in helping us with what we’d hoped were already good songs.”

Currently, the band is on the tail end of a mainland European tour to support the album’s release, a trip that they tend to think of as a vacation of sorts.

“I think because we’re a British band…whenever we go to Europe, even the first time we started, like, touring Europe, we always found, like, for the most part, you’re treated better. Like, there’s almost more care from promotors and venues as well, to look after you, whatever size your band is, or whatever reach you have,” Tim said, contrasting that to his own experience as a band in the UK. “And I know that a lot of…friends of ours in European bands that come to England are sometimes a bit shocked that it’s not the same. So I think in a way, we’ve got it a bit easier, ’cause we kind of got used to how things are in England. And then it’s kind of like a nice surprise when we get to Europe that [we’re] cared for a little more.”

TTNG plays tonight at Magnet Club in Berlin. The show begins at 20.15.