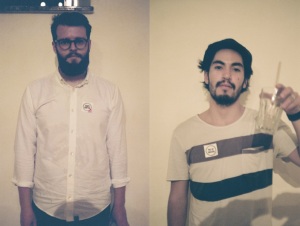 Young Hare is a band that just can’t be satisfied.

The two-piece band out of Frankfurt, consisting of members Marc Krause und Phil Pfanzer, has been described as playing tropical dreampop, but the guys themselves aren’t quite certain about how to label the music, nor what the ultimate goal in playing their music is.

“We can never say ‘this is where we want to be’ when we play live because this is not what I see when we make music,” Pfanzer said, explaining the lack of a definite sound destination.

Krause agreed, sharing that because Young Hare consists of just the two of them, the music is confined to only what they alone are capable of. Not only that, but what many two-person bands do is not the same thing they strive to achieve with their sound.

“It’s just, we don’t have the classical band setup [so] it’s always very difficult, being two people and not doing usual stuff which two people just do,” he said.

The two, who are in their late 20s, met around age 14 or 15 when they played in a pop-punk band, which later evolved into Deutschpunk. Yet as most teenage bands do, theirs broke up, and the two didn’t see one another regularly until two or three years ago.

At this point, they started talking about music, and realized they were both into the same kind of music, something somewhat rare in a city like Frankfurt, where electronic music is the focus and there is not much of an underground scene to speak of.

“There is a music scene,” Krause shared. “But Frankfurt is a lot based on electronic music. So there’s a house music scene which is pretty big…and everything is compressed to two clubs.”

He cited Robert Johnson and Cocoon Club, the latter of which recently closed down.

“We don’t have any big scene and the shows don’t get paid well,” Pfanzer said, citing a need for the band to extend its reach beyond just Frankfurt.

But of course, the bigger challenge has been working within the confines of establishing and becoming comfortable with a two-person setup.

Initially, Pfanzer attempted a solo route with music, but found it wasn’t working as he’d expected.

“I’ve tried to do music on my own, and I have bought myself a lot of drum computers, and…synthesizers, and that was the only thing I was working for,” he said. “But I realized I couldn’t make music on my own. I don’t know if it was bad, actually; people said I was good doing it on my own, but it wasn’t feeling right.”

However, when he met Krause, he said he knew he’d found the missing component. But Krause didn’t come into it without his own set of challenges.

“Working with a sampler and then with drums, and I as [drummer have] to hear what the sampler is doing…it was, like, a newer experience I just didn’t know how to work with,” he explained.

Still, Krause and Pfanzer charged ahead with their music vision, initially releasing a 4-song tape, “Pick a Fruit,” in early 2011. Later that year, a 4-song, self-titled 12″ was released on unbreakmyheart.

Pfanzer said that although he doesn’t often listen to past recordings, when he does, it’s somewhat akin to watching a documentary.

“I want to do something so meaningful, like the music I listen to,” he said, explaining how listening to recordings helps him to see what the band has accomplished and what the two can do better the next time around. “It’s so funny because making Deutschpunk music, it was like, we were there, and we made song that we really liked, and right now, it’s like, I’m searching for a picture of music, and I’m getting closer and closer but I will never be there.”

Admittedly, however, that’s not necessarily a bad thing, because it keeps Young Hare trying new things.

More recently, in October of last year, the band released a split 12″ with Berlin-based BDYBLDNG, which is indicative of its newest direction.

However, regardless of what Krause and Pfanzer may attempt, at the heart of it all lies the goal of emulating a solid pop song structure.

The two have talked about trying something new, not because they think the formula is flawed, but because they find themselves aiming to build in too many changes in a three or four-minute song.

Instead, they are looking to Frankfurt’s electronic scene for some fresh inspiration in keeping the music melodically accessible but practicing restraint on too many directions in one song.

“I really like the idea of percussion instruments and this moving forward but just being monotonous,” Pfanzer said, sharing how the effect of one change over a longer period of time, as opposed to many changes in short amount of time, can be stronger if done properly.

“We put something together, and we jam on it, and if there is a feeling, we work on it,” Krause said of the songwriting experience. “And then we try to keep that feeling or make that feeling more intense.”

Young Hare plays tonight at Kastanienkeller in Berlin. The show begins at 22.00.