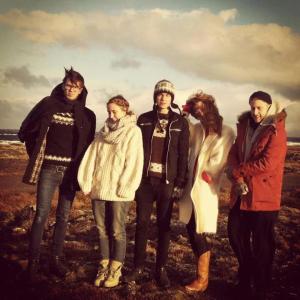 There is an air of apprehension as the members of Highasakite, a Norwegian indie pop band, sit down in the underground backstage of Bi Nuu. It’s September and the Berlin venue–located beneath a U-Bahn station–is host to one of dozens of Berlin Music Week-related shows throughout the city. And although it’s still too soon for the members to feel nervous about the weekend’s shows, the collectively soft-spoken group admitted that this interview is its first outside of Norway, and in English no less.

It’s not long, however, before the quintet, which consists of founding members Ingrid Helene Håvik and Trond Bersu, veteran Øystein Skar, and relative newcomers Marte Eberson and Kristoffer Lo, is opening up about its history, its perceived setbacks, and its aspirations.

Although Highasakite is based in Oslo right now, the band first began as a two piece, when Håvik and Bersu studied music together at the jazz academy in Trondheim.

After compiling a handful of songs, they went into the studio with a producer to make their first record. Somewhere along the way, between May and August of 2011, Skar–who Håvik and Bersu attribute with pulling the songs together–joined them, making Highasakite a trio.

In spite of the jazz music backgrounds, the members are firm that the jazz influences don’t play much of an active role in the music the band makes now, but they don’t discredit it either.

“Since all of us [are] educated we have a lot of possibilities,” Håvik said, referring to the direction the sound can take. “We can do whatever we want.”

Not only does the diverse music background of the band’s members play a role, but the fact that what was once a duo is now a five-person band–a relatively new occurrence–also leaves a lot of room for change.

It was earlier this year, in June, when Eberson joined, followed shortly by Lo.

“I was a huge fan of the band since they started out. I think I’d seen eight or nine concerts of them,” Lo explained. “So I was honoured [when they asked me to join].”

The two new members see their role as having added to the already existing sound, without diverting its course. And while the arrangements might have changed between the February release of debut album “All That Floats Will Rain” and present day, the band still views its music as far from filled out.

“I think the sound has grown pretty much since the first show I saw with these three guys,” Lo said, offering the unique perspective of having followed the band since the beginning, and now being a member. “It’s become much bigger but still has a lot of room in it. It’s not overfilled all the time. It’s got room and space.”

This summer, the spirits of Highasakite’s members soared as the band received an unofficial endorsement from Bon Iver after a performance at the Øya Festival, but in the time since, the band has already moved to building a fan base all its own. And while the group had only played Norway and Germany by summer’s end, already the five are extending their reach, with an appearance at Iceland Airwaves, shows in the UK, and a slot at next year’s SXSW Festival.

Of course, even with numbers of listeners growing, the band laments the state of today’s music industry, which minimizes profits for artists. The band cited Spotify as an example of a service that provides users with free or low-cost music streaming, but which pays the artists very little for the music.

“I think you really just have to redefine the whole streaming process. You have to sort of teach the audience that art is something you pay for,” Lo said. “When you teach people to get art for free, [they won’t pay for it]…that’s the way people think and you have to change that.”

Yet at the same time, the band counts itself as lucky, because not only is the scene in Oslo full of bands, venues, and shows, but musicians receive subsidies from the government to pursue music.

“The music scene in Norway is really lucky in many ways. Especially if you look at the other European countries, we’re one of the few countries left that doesn’t have a right-wing oriented government,” Lo shared, explaining that the system in place in Norway is geared toward cultivating and sustaining an artistic culture.

But when this government support meets the rest of the world, where music is often viewed as a commodity item that people want for free, it’s easy to understand why members of Highasakite are in such shock about how to make a way as musicians.

Eberson noted that when her parents were young, they might have protested about this kind of thing, but instead, her culture is content, bordering on apathetic, and complains without being proactive.

The members all agree on this point, but no one is quite certain why, or how to go about changing the status quo. Lo offered up the suggestion that perhaps, because the money always come from somewhere in Norway, people feel there is a safety net. Håvik agreed, sharing that making money is all relative.

But it’s this catch-22 which many artists struggle with. The money comes in somehow, and it pays the bills, but there is always an accompanying worry about where it will come from next.

To that end, the band members want to create some kind of awareness that reevaluates art’s meaning and purpose, and ultimately its price. And while they may not be protesting in a traditional sense, perhaps music can be the vehicle to make the voices of Highasakite be heard.