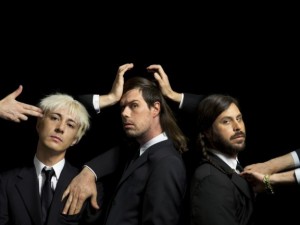 If there’s any one concept or word that defines the band Liars, it’s change. And as cliché as that might sound, member Aaron Hemphill insisted that whether or not they like to, the band members often fall back on these overused expressions to describe things.

That’s not to say that Liars makes clichéd music. In fact, one of the distinguishing factors of the three-piece indie band is that no two albums sound alike. Formed in 2000, the group consists of Hemphill (percussion, guitar, synth), Angus Andrew (vocals, guitar), and Julian Gross (drums), and boasts a catalog of countless EPs and singles, and six full-lengths.

The band’s most recent album, “WIXIW,” came out on Mute Records in June of this year, and it is noticeably different from the ones that preceded it. This is due, in large part, to the experimentation with electronics, something that also necessitated a new kind of writing approach that involved Hemphill and Andrew writing songs together.

“We’ve always co-written the records,” Hemphill explained. “The difference is, we collaborated earlier on, and I think to clarify what that means is, we write songs pretty much alone, or used to. And we’d work really hard to finish those songs before we gave them to each other, before we let each other hear our body of work. And we would then form an album out of those…or maybe do a little bit of work on each other’s songs if we felt like it.”

But on “WIXIW,” the two started working together nearly from the get-go, something which Hemphill attributed to the necessity of helping one another navigate new musical terrain.

“This time, we shared our ideas much earlier and were more involved in building the songs and stuff like that. So, I guess, it would be more an early collaboration,” he said, explaining why. “It was…the result of using, like, more electronic software and computers and doing it all ourselves. And we had to help each other through the process more, and, you know, we started writing this record in a cabin by ourselves, and there was just no way to not work on it together.”

The result of the new writing approach was a distinct sound and style, something the members weren’t necessarily expecting, nor prepared for.

“I think it had a huge effect. I mean, we’d done that in the past with maybe like two or three songs on a record, and then the other songs would be sort of in the fashion I described earlier,” Hemphill said. “But yeah, I mean, it’s definitely much more difficult. It’s much more rewarding. And I feel, you know, to me they come out better. You know, I feel that sort of, you know, it’s maybe cliché, but it forms that sort of third body [in the music] that is present when you’re alone.”

More surprisingly, however, was the way the song structures ended up influencing and informing the lyrical content, which was something Hemphill described as more introspective.

Interestingly enough, although the sound on the new album is worlds away from 2006’s “Drums Not Dead,” and although that album was far from the minds of the members while writing the new one, Hemphill recalled that the situations surrounding both releases were somewhat similar, which in turn created a sort of through-line connecting the two.

“It was impossible to see while we were making this record what was in common but now that its happened, [I see it],” he said, likening the processes to one another. “You hear about bands going through all this intense personal crap and they make a record out of it and you know you hope that that’s not necessary to make it work, but it just seems like with both records there’s so much going on that we really just had no clue what we were doing…Angus and I were both in opposite sort of states, I think. Be it like, relationship status or just how we felt in our skin, you know. There were moments with both records where it just seemed like we could work horizontally, you know, like spread, like made it a scatter-piece. And it was just not going anywhere, and [there was] this weird loss of perspective because you put so much into it. And both experiences had a lot of anxiety, and there were moments with this record where I just I didn’t think we would make a record, you know. And I think, again with both records, we kind of pulled each other through it…it’s such a scary thing sometimes, to make a record, because you can just lose all perspective.”

The difference, he said, is that on the two albums in between–2007’s “Liars,” and 2010’s “Sisterworld”–one of the two always had a sense of perspective that somehow tied into the overall vision of the album.

“One of us had the ability to relate what we were making with that vision. I mean, like, someone who is of the state of mind that we could hear the music,” he said. “And I guess what that says about both processes is that, you know, we knew that what we were making was very intense and coming from an intense place. We just didn’t know how finished it was. And I think that what that could point out to us is its not important if it’s finished.”

On that note, Hemphill noted one of the challenges of the new record was to agree on a place where songs were “finished,” something which was complicated by using computers in songwriting, a new route which led to the tendency of getting carried away. Luckily, he shared that they have worked together so long that they know how to keep one another in check.

“Angus and I have the benefit of having complimenting contrasting personal qualities. I’m a pretty harsh editor, where I find the 30 or so tools that I like out of the bazillion…and that’s what I do, whereas Angus kind of explores forever. [Eventually] one of us will sort of put a lid on it, and it changes who that person is,” he said. “[Even so], I don’t feel that we have any authority in what we do anyway. That’s part of this anxiety. How can I do this for 12 years and still not know how to make a record?”

Yet in spite of this lingering sense of uncertainty or feeling like he lacks the proper know-how, Hemphill did say that the band takes each successive album as a learning experience, even if it is after the fact.

“We definitely analyze to death everything we do,” he said of the music.

Interestingly enough, however, Hemphill also noted that it’s always the smaller things that they labor on or spend ages reflecting on, whereas the decisions that affect everything on a larger scale often involve very little discussion or debate.

“Normally about a year into tour…Angus and I will have a discussion that usually lasts about 10 minutes, and a lot of huge life decisions are made,” he said. “We just want to do what’s interesting to us. I mean, afterwards of course, like discussions come into play and figuring out what things could mean, where the concept can go, but that initial reason for doing [something is that it feels right].”

Liars play tonight at Festsaal Kreuzberg in Berlin. The show begins at 21.00.

One thought on “Interview: Liars”