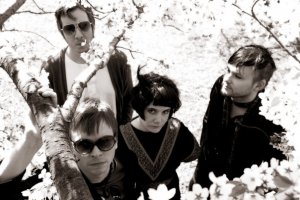 Though there are countless indie pop bands coming out of Sweden, Malmö’s Stars in Coma is, without a doubt, one of the most prolific of the lot. Case in point: since emerging on the scene in 2005, the band has released two singles, six EPs, and six albums, the most recent of which was 2011’s “Midnight Puzzle.”

Of course, Stars in Coma wasn’t always a band, in the true definition of the word. In fact, the humble origins date back to the childhood of André Brorsson, who knew from an early age what he wanted to do with his life.

“Basically, I wanted to be a musician since I was a very little kid,” he said. “I think I got my first guitar when I was 10 or so.”

That said, it was actually in 2000–five years prior to the release of the Gizmo Goes To War”–that Brorsson began referring to himself and his music under the Star in Coma moniker, yet he didn’t think it good enough to form anything proper.

In fact, it wasn’t until sometime around 2007 or 2008 that Brorsson was confident enough in the project to consider taking on band members, largely in part to expand the live sound, something that couldn’t be accomplished with just Brorsson on stage.

As a result, he feels that playing live has become “increasingly important” in the time since, especially since the now four-piece band also has the luxury of bringing on extra friends and musicians when needed, which contributes to a constantly growing and evolving sound.

But it’s not just the live setup that has changed as a result; the music now benefits from the input of the band’s additional members, on stage of course, but also sometimes during the writing process.

“I still write and record all the music, but everyone contributes ideas on how we should arrange the live versions of the songs,” Brorsson said. “I have…started to collaborate with my girlfriend a bit. She plays flute and saxophone, and I have used her skills on some new songs, ’cause I don’t know how to play those instruments. She’s also a valuable member of the live band.”

As for the live versions, Brorsson admitted that while writing, he doesn’t pay much thought to how the sound of songs will translate on stage, but did say that on an unconscious level, he probably does think about it. All in all, he feels they tend to sound similar, just heavier, when played live.

Meanwhile, the transition from solo artist to band can be a challenge for some, but not so for Brorsson. After functioning so long as a solo project, then bringing additional live members on board–a roster that includes Mattias Lidehäll, Håkan Carlsson, Nicole Eklund, and Johan Rydlöv–he shared he didn’t, at any point, feel restricted in his creativity. In fact, Brorsson feels he is just as free as ever to write the music he wants to write.

“I’ve always felt that I’m ‘allowed’ to do whatever I want to. I listen to all kinds of music, and I want that to be reflected in Stars in Coma. I’m easily bored, so variation in both genre and composition is important to me,” he said. “My studio is my only limitation really. I think that’s good, because then I’ll have to find new ways to be creative with the same old equipment.”

Of course, being a Swedish band, there is definitely a label attached to the music that people expect to come out of the country. To this, Brorsson said that there does tend to be a larger emphasis on pop melodies for whatever reason, but also said that the scene is not as collective or cohesive as it might appear from an outsider’s perspective.

“I feel the scene in Sweden sometimes is a bit narrow-minded and isolated. It feels like every band is an island, which of course can be good in some creative perspective,” he said. “[But] the indie pop scene in London, for instance, is much more welcoming, warm, and forgiving…[it’s also] way more amateurish than the Swedish live scene. Some of the bands there would never even be allowed to play venues in Sweden.”

As a result of these cultural differences in attitudes about music, he shared that Stars in Coma tends to play abroad more often than in Sweden. And including this month’s Indie Pop Day festival, the band has played in Berlin a total of three times.

“I absolutely love to visit and play in Berlin,” Brorsson said. “It’s such a wonderful and crazy town. Every time we play in Germany, we are also allowed to play longer sets for some reason, which is cool. Usually when we play in Sweden or UK we’re stuck with [a] 30 or 45 [minute] set.”

That said, however, Brorsson shared that the moment a show ends is one of the more rewarding parts of the band, for him.

“Just after the last song, that’s a great feeling,” he said. “Or when I’ve finished a song that I’m really satisfied with. The whole creative process is very rewarding too.”

It can also cause burnout, which is why Brorsson has to be careful not to overdo things, as he is in charge of facilitating the band, which includes everything from writing and recording, to booking gigs and managing logistics. This is on top of a full-time job.

At the same time, however, it’s not like he could just up and quit music, because for Brorsson it’s not just a hobby; it’s a life force.

“It’s more of a compulsive behavior that I need to get this music out of me. I need to vent musically,” he said. “So it’s rewarding when I create something coherent out of this force.”