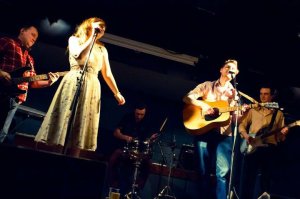 The Just Joans is a band that has been around for some time, but it’s only in recent years that the Glasgow-based indie pop band has been a “real” band, a statement even some members are reluctant to claim. Singer and guitarist David Pope described the process as a lengthy one; he began playing guitar in 1997 and wrote songs that he didn’t share with anyone until years later. In 2005, his bedroom project made the first step toward becoming a band as he settled upon The Just Joans as a band name, and eventually played his first show.

“One of [my] friends…encouraged me to play a gig, and I guess everything just gradually developed from there,” he said. “Over the years, other people have got involved and somewhere along the line we became a ‘real’ band.”

Although the project is Pope’s in origin, and in spite of the fact that he still is the primary songwriter, he insisted that every member does play a role in taking his initial ideas and expanding them into proper songs.

“I write most of the songs, but they only really come to life when the band [gets] together and [plays] them,” he said. “Everybody’s ideas get thrown into the mix and the songs often end up sounding completely different…much to my chagrin.”

The group already has a handful of albums and mini-albums to its name, the most recent of which is this year’s “Buckfast Bottles in the Rain.” Released in May on WeePOP! Records, the album follows in the footsteps of its predecessors, with melancholy lyrics over lo-fi twee melodies.

“[It’s] a semi-autobiographical concept album about leaving school, moving away from your hometown and going to university,” Pope explained. “Most of the songs were written years ago and I suppose it’s almost like the soundtrack to an extremely dull film about an extremely self-involved young man.”

As for the claim of being self-involved, Pope insisted that it’s somewhat necessary for a lot of songwriting.

“Songwriting is a fairly self-indulgent pastime–sitting in a darkened room wallowing in regret and strumming minor chords,” he said with a laugh. “We’ve always been drawn towards fairly ‘miserable’ music. For years I listened to nothing but The Smiths and The Magnetic Fields and I guess that they’re the kind of bands we’ve tried to emulate. The great thing about Morrissey and Stephin Merritt songs though is that although the songs are often about unrequited love, loneliness and heartache, there’s often a self-awareness and a bit of humour in them too.”

Ultimately, although the music can come across as self-deprecating or just plain sad, Pope remains a generally laid-back person, something which extends to his goal for the band: having it as an outlet, but not taking things too seriously.

“I don’t think I’d ever really want to be a full-time musician. It’s lovely just to be able to play and record with your friends without any real pressure or obligation,” he said. “The rock ‘n’ roll lifestyle has never appealed that much; casual sex and drugs are probably a bit overrated. I’d much rather drink tea and watch the occasional horror movie at home with my girlfriend…I think.”

The Just Joans play Sunday at Marie-Antoinette in Berlin, as part of the weekend-long Indie Pop Days. The show begins at 16.00.