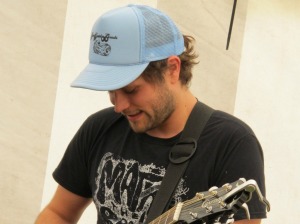 For those whose Swedish isn’t quite up to par and who may be scratching their heads, the literal translation of Fulhäst is “uglyhorse,” although it’s not quite a real word. Fulhäst is, however, the name of solo artist Niklas Vestberg, who plays a particular brand of Nintendo Game Boy-powered pop music.

Vestberg, 33, is Swedish by birth, but has been living abroad for 16 years and currently considers London his home. He is also best known as one-half of former casiopop outfit Moustache of Insanity–what he refers to as his first “proper band.”

“[Moustache of Insanity] decided to quit earlier this year, because Bill (the other half of the band) had other things that he had to prioritize,” Vestberg explained, when broaching the topic of Fulhäst’s creation.

The breakup hardly phased him though, at least in terms of musical production, and he wasted no time emerging with solo material. The result is Fulhäst: an 8-bit musical experiment with a Game Boy at the helm, and guitars, keyboards, and vocals to accompany.

And in spite of a somewhat legendary status that proceeds him in indie pop circles, Vestberg insisted that he isn’t necessarily a great musician, something which is more evident now that he’s going at it alone.

“I’m not a terribly musical person, so making music on a…Game Boy suits me quite well,” he said. “I can just sit and change the note values up and down and rearrange it until it sounds ok. Obviously I’m learning and progressing as I go along, but I still find it very hard to memorize songs on any normal instrument.”

Although this year is the first time he’s taken his project out on the road–tonight’s Berlin show will be his sixth live performance ever–it had been in the works for some time. As for the name, it is the result of what Vestberg described as one of those you-had-to-be-there moments. Yet although Fulhäst is relatively new in terms of public visibility, the name has actually been around for a couple years.

“I think I even have some drawings at home from a few years back with lettering saying ‘Moustache Of Insanity – Fulhäst,’ suggesting that I wanted to do a Moustache EP by that name at some point,” he shared.

But some things never happen so that other things can. One example: in June of this year, Vestberg released not a recording named Fulhäst, rather a recording under that name. “Down the Deuce,” a seven-song cassette with a limited run of 100, was put out on Fika Recordings. Less than two months have passed and with only seven tapes remaining, it has all but sold out.

No easy feat, considering what is required for each one; every cassette is shaped like a Game Boy, with a separate photo on the cover. The tapes are individually assembled, which takes about 40 minutes to do.

“I can’t remember how we came up with the idea for the design. I think I just realized one day that cassettes have similar proportions to a Game Boy. Then it just continued from there,” Vestberg said. “In this day and age when more and more music is distributed digitally, I like to put some effort in and make each copy special. So, here every copy has a different ‘screen,’ a photo taken with an old Game Boy camera. It’s all hand cut and glued and is a complete pain in the ass to do, but I think it’s worth it.”

That DIY sensibility is important, not only for the fans, but also for Vestberg’s own route toward self-validation–something every artist seeks.

“There’s [a] sense of personal accomplishment when you do something completely on your own,” he shared, with more than a hint of pride. “I’m extremely proud of my Fulhäst EP, everything from the songs to the artwork. I’m fully aware that it doesn’t sound professional or whatever, but I’m not a professional and I did it all myself.”

Still, while Vestberg enjoys the music writing and recording process, and particularly having something tangible to show for it, performing live still comes as a challenge to him when it’s just one person on stage.

“The main difference is that it’s not as fun, or maybe I just haven’t learned to enjoy it fully yet. You feel very exposed when you’re alone on stage, which is probably why I like to hide behind behind various gadgets. Even my microphone serves some sort of protective purpose rather than being essential for the songs,” he said. “[But] I’m slowly learning to relax and enjoy myself. You just feel more self-conscious when you’re alone on stage. I guess I need to get over that.”

It’s a packaged deal though, and with each successive show, Vestberg hopes to improve. Of course, the audience response also plays a role in it, but ultimately, he shared that his aim is to make the kind of music he himself loves to hear and see live.

“[I like] bands that inspire their audience to dance and have fun, not just stand passively and watch,” he said. “Ideally, I guess I would like to make music that people just think is fun, but what I’m doing now is very much an experiment. I’m learning to make this kind of music as I go along…[but] you know, it’s OK to mess up playing a song. It’s not the end of the world.”

And although Vestberg admitted that Fulhäst is currently viewed by many as “Nik from Moustache of Insanity’s new thing,” he does hope it will grow beyond that connection and establish itself as something meritable in its own right.

“I don’t think I’ve really found my own sound yet, [but] despite not being very good at it, I do like making music, so [Fulhäst] is just a way to keep doing it,” he said. “I wouldn’t call it a focus or something ‘I pursue.’ It’s just something I do so I don’t die of boredom.”

Fulhäst plays Friday at Marie-Antoinette in Berlin, as part of the weekend-long Indie Pop Days. The show begins at 19.00.