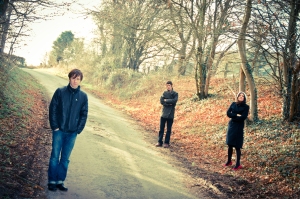 The standard for many bands is to write some songs, take on some gigs, write some more songs, and eventually get around to recording an album. But that’s most bands, and if nothing else is clear, the Proctors aren’t most bands.

In fact, the band formed in 1993 but didn’t play its first show until a performance in Cambridge in April of last year, preferring instead to release singles, 7-inches, and EPs.

“Originally the band was a recording concept, and we never played live. [We were] far too shy for that!” said Gavin Priest, guitarist, singer, and one of the founding members. “We released a couple of singles and a mini album on Sunday Records [and that’s it]. So the main difference [now] is we are playing live.”

This year, the Proctors have already played popfests in Madrid, London and Limoges, with Berlin being the next on the list. It will not only be the band’s first appearance there, but also the first trip to Berlin in general.

Bassist Stephen Davies agreed, sharing that it will also be his first experience abroad with the band, since he missed the popfests in Spain and France.

“I’m really looking forward to visiting Berlin, as I have never been to Germany before,” he said. “For me, Berlin has always had a magical and romantic feel. There is so much history and rock’n’roll.”

Because of short notice, the band, which is normally a four or five-piece, will play in Berlin with just Priest and Davies, along with a special guest, Lisa Bouvier, who in addition to being a solo artist, is also involved with the bands Stars in Coma and Lost Summer Kitten. This means that the other members – Margaret Calleja (vocals, keyboard), Adrian Jones (drums), Thomas Aherne (guitar, sometimes) – will not be in attendance.

They are present, however, on the new EP “I Need To Tell You,” released earlier this year on Shelflife Records.

Later this year, the band plans to release a full-length, “Perfect World,” for which they are still working on determining the track listing. But although its a new album, not every song is new in the sense of the word.

“A few of our ‘new’ songs like ‘Perfect World’ are ideas I had in the old days,” Priest said. “We discovered on an old bedroom cassette [and], in fact, half the album comes from that cassette.”

As for the new songs, according to Davies, they will be “pop with a melancholic streak and a bit of shoegaze thrown in.” The majority of them were ideas of Priest, and often he collaborated with Davies on ideas, but truth be told, the whole band pitched in at various points to write the songs. Calleja, for example, has written a song that she sings on, whereas the members cite Jones as the person to keep the others in check, in addition to contributing a lot on the production side of things.

Meanwhile, the band also points to – strangely enough – the bathroom as an influential part of the songwriting process.

“Mainly I get an idea for a tune, sneak off into the bathroom with my MP3 recorder and acoustic guitar, and strum a few chords,” Priest shared, blaming Martin Hannett and Joy Division in a tongue-in-cheek matter for his fondness for bathroom acoustics. “We love reverb, so the bathroom is the best place to start.”

And when it comes time to record, the band tries its best to capture the proper sound, with Priest being what Davies refers to a the perfectionist type, striving toward “that extra 10 percent.” Of course, even with an idealist nit-picker in the bunch, things don’t always turn out as members would like, but Priest was adamant that falling short of goals is something part of the process, and not always with negative results.

“We have been recording everything ourselves and tend to have a nightmare with the technology,” he admitted. “But we bumble our way through, and I’m a believer that musical and technological incompetence can be a good thing! I believe people have created genres working like that. I am always thinking we could have done it better, but some of my favourite records could have been done better [too].”

Even after nearly two decades as a band (and years before that in other bands), the Proctors are open to learning and improving. And while taking an extended break can change or revert things, such as the dynamic of a band, the receptiveness of an audience, and the members themselves, the Proctors insist that the things which matter most remain the same.

“I think essentially we are still the same people but with a few more grey hairs…we have grown up but still have that youthful exuberance in our sound.” Davies shared. “Live, we are still kind of punk-y pop, which is great. The recordings can be more experimental at times. We still get excited
about things…we are still massive pop music fans. When we got back together in the summer of 2010 it was like we had never been away. We all know each other well and look out for each other.”

Priest agreed, also pointing to the core of the music they make – regardless of the variations – as something that is constant.

“We like to make melancholic pop music,” he said. “That doesn’t change!”

The Proctors play tonight at Roter Salon in Berlin as part of Popfest Berlin 2012. The show begins at 19.00.