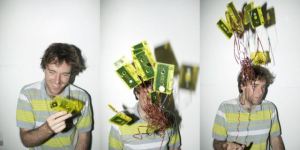 The world that exists inside of C.R. Matheny’s lyrics is nothing short of fantastical, which is why the process from intangible inspiration to substantial song is so fascinating. Somehow, the things he deals with are so firmly rooted in reality, but along the way, are transformed – sublimated even – until the end result hardly resembles its often mundane starting point.

“Almost everything I write starts with a free association,” he said, speaking directly to the surrealistic take on the quotidian that is prominent in so many of his lyrics. “I obsessively think about things and…that’s how [that] sort of commonplace domestic imagery gets lodged into songs.”

Matheny, the driving force behind experimental indie-folk project Emperor X, attributed the way he writes to something he referred to as a “reader’s mentality,” meaning that the voice and ideas of many of the authors he reads play a large part in helping him develop his own process.

But there’s more to it than that. In addition, Matheny is a firm believer in the present. Citing musicians who write to emulate the life and times of their own musical heroes, Matheny emphasized the need for musicians to be present in the songwriting process.

“I think if you put yourself in the world as it is and write about the world as you experience it rather than as you wish you’d experienced it, you come out with better stuff,” he said.

And when it comes to describing his own process, this is what he falls back on: what he knows.

“I sort of write songs as I speak, and I think I speak like a drunk English teacher,” he said with a laugh. “[But honestly], the more I know about how I get there, the more difficult it would be to actually get there.”

Matheny is currently on his first European tour, a long time coming, considering he has been making music as Emperor X for more than a decade. Yet he certainly started it off proper, appearing this past weekend at the infamous Fusion Festival.

On his mostly German tour – which also strays off a bit toward Austria, Slovenia, the Netherlands, France, Belgium, Norway and the UK – Matheny is particularly interested in the idea of stepping outside of his comfort zone.

“There’s just so much unknown,” he said, explaining how he is relatively good at reading an American audience, but has no idea how to gauge the interest and reactions of a European one.

Additionally, Matheny shared his perceptions of the role that artists and musicians play on a societal level.

“This is a cultural exchange and…I am anticipating that there [are] some differences in how the audiences relate to performers, and in general how artists fit in to society,” he said. “In America, you’re basically like a second-class citizen at best [and] I get the idea that it’s a little bit different [in Europe]….I’m looking forward to seeing if that’s true.”

As for his live show, Matheny said it namely consists of him playing a 12-string guitar and singing into a dynamic microphone, which – in addition to projecting his vocals – picks up ambient sounds in the room. Still, he insisted that no two performances are the same, with the resulting variations based largely upon what he feels the audience best responds to.

“It changes from venue to venue. It changes from room to room,” he shared. “Sometimes I’ll just play completely acoustically if the venue’s small enough. Sometimes I will set my laptop up and my mini mixer and a couple delay pedals and do some crazy DJ stuff, if the crowd seems like [it wants] that. It’s very diverse and dependent on what my mood is, and what the mood of the audience is.”

This flexibility and experimentation in performance is something Matheny has built the Emperor X reputation upon, as he is known for tinkering with and transforming the songs between their recorded versions and their live renditions.

“Having those options makes me feel like I’m wasting my time if I don’t use them,” he said, citing the need to be reinterpreting songs live as a responsibility to the audience.

Historically speaking, musical experimentation is the basis of Matheny’s work – even that which predates Emperor X. He recalled his childhood when, at the age of 8, he began experimenting with recording with cassettes using his Fisher Price tape player.

“I was a little tape nut from the get-go,” he said.

This evolved over the years, as Matheny began working with a karaoke machine – which he turned into a multi-tracker – before starting to use a four-track.

Fast-forward to today and although the common medium is different and Matheny admitted to partially changing with the times, he still looks to cassettes as a prime example of something that shifts alongside a musician and his or her music.

It is exactly that fleeting nature surrounding tape recordings that Matheny is trying to get at, and those familiar with his catalogue know how it continues to play out even today, specifically in terms of his tape burial project.

“I think coming up with those ideas is the most difficult and simultaneously the most satisfying part of what I do,” he said, referencing the geocaching.

At the same time, Matheny knows its important to also be current with the times, which is why he releases his music across a variety of formats. His most recent – and arguably sixth or seventh – album, “Western Teleport,” came out on Bar/None Records, which was his first release that had access to so many markets and potential audiences.

“Bar/None definitely brings some big distribution guns to the table,” he said of his decision to go with the label.

The accompanying challenge, then, was to not let this idea of exposure affect how he wrote and recorded his music. And for the most part, he feels as though it hasn’t.

As proof, Matheny referenced his newest album, set to be released later this year, which he described as a mixture of Caribbean pop and fast reggae influences. And although he admitted the description sounds terrible, more important to him is that the process – both of writing this kind of music and of going beyond his previous musical boundaries – is fun, and that it remains unaffected by anyone’s expectations, save his own.

“There’s no point for someone like me in sticking to a single way of doing things,” he said. “Because when so few people know about your work, like, you’re not going to disappoint anybody by not putting out the same album.”

And at the end of the day, there are two moments that make it all worthwhile for Matheny. The first is during the writing process, when a song is realized with a feeling akin to being hit with a ton of bricks. The second is an extension of the first: when that song is played to a crowd and the audience “gets it” too.

“When it [clicks], it’s the best feeling that anyone can ask for,” he said.

Emperor X plays tonight at Schokoladen in Berlin. The show begins at 20.00.