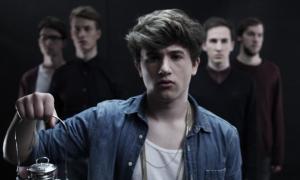 For a band like Hamburg’s In Golden Tears, the past couple years have been nothing short of thrilling, as the group made its way from a couple of teenagers and transformed into one of the up-and-coming bands in the German indie rock scene.

Although a full-fledged band now, In Golden Tears can trace its humble beginnings back 2008, when Patrick Kowalewski (vocals, guitar) and Patrick Behrens (guitar, vocals) first decided to play music together. This partnership consisted solely of a guitar and drums, with the two taking turns trading off the instruments.

At some point along the way, they became interested in developing the sound more fully, and considering both are primarily guitar players and not drummers, they opted to find a bass player and a more permanent drummer. This came about in the form of Mats Dörband (the former) and Robin Shaw (the latter), and later, with the addition of keyboard player Max Schild.

Now, the quintet is working with Berlin-based Humming Records and in the process of recording its debut album. To date, the five have released two singles: 2011’s “Urban Emotions,” and this year’s “Underneath the Balance.”

But still no debut album, although the members insist it should be released “soon.” The reason being is that these young men are particular about their craft, wanting to only present the best possible version of themselves to listeners.

“We’re trying to get it done as soon as possible, but it’s a big thing and we want to make it perfect and not just an album,” Behrens explained. “We’re trying to make a masterpiece, a perfect debut.”

Of course, a large part of that also consisted of the band first working to truly discover its sound, its voice. With all of the members hovering at or around the tender age of 21, this is no easy feat.

“The biggest challenge is to find your own sound,” Behrens said, noting that the goal is for a listener to hear a song and be able to identify the band based on the particular sound, or essence, of a band. “It’s not the sort of thing you can do in two months, or a year.”

He cited that one of the more difficult aspects in all of it is to find a common ground between the members, without compromising the music itself, something which Kowalewski insisted is not so easy for newer bands.

“You have to decide where you want to go with the music, and it’s pretty hard for a young band,” he said.

Luckily for the five, they melded together relatively easily, and described the process of defining the In Golden Tears sound as much more natural.

One of the main ingredients, according to Behrens, is getting away from the mindset of genre, and instead letting what comes out, come out.

“I think it’s important to say that when we write songs, we don’t want to put ourselves in some category,” he explained.

And because the music is formed in a collaborative manner of piecing things together, there is a little bit of everyone in the music.

The one part that is more of a solo venture is the duty of writing lyrics, which falls squarely upon Kowalewski’s shoulders. And although his spoken English is sometimes fractured, his writing comes across as solid and confident.

As for the place the collective band wants to be, already, the business side of things has taught the members about the realities of playing music.

“It sounds cheesy, but…the more you get into the music business, the more you learn,” Dörband said, pointing to this dose of reality that has sped up the maturation process.

But while it has taught the members to be grounded, it has also renewed their determination to place the music at the spot of priority one.

“We want to make music and it’s a passion for us,” Kowalewski said. “It’s not just that we want to be cool guys playing in a band…every minute we have, we put it to our music.”

In Golden Tears plays tonight at Automobil Forum in Berlin, as part of Fete de la Musique. Their set begins at 21.00.