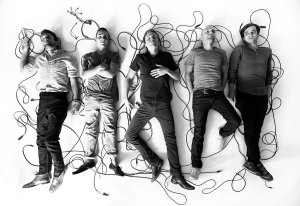 White Rabbits just can’t slow the momentum. Since the now five-piece indie rock outfit released its debut album, “Fort Nightly,” in 2007, the band has kept going and going and going. A sophomore album, “It’s Frightening,” came out in 2009, and the third album, “Milk Famous,” was released earlier this year. In between all of these albums, the band has toured almost incessantly.

And while that much time in close quarters can be troublesome, particularly for a band with so many members, White Rabbits spent time living together in a loft in New York, which Stephen Patterson (vocals, piano) cites as one of the reasons why the band dynamic works.

“I think we do pretty well [on the road], which I attribute to the fact that we spent like three or four years living together,” he explained. “[So on tour] we weren’t at each other’s throats all the time.”

For the newest album, the band (which also includes Matt Clark, Alex Even, Jamie Levinson and
Greg Roberts) decided to test songs out on the road before committing them to a recorded version, which is a step away from how the first two albums were put together.

“We write fairly quickly,” Patterson said. “We’ve always just kind of gone into the studio right then and there.”

However, that’s not to say that it isn’t sometimes a vulnerable sort of experience for the members, especially when trying out new songs that they feel as though they’ve poured their hearts and souls into.

“Talk to anybody in the band,” Patterson said. “It’s very terrifying…whenever you have people around you listening attentively.”

Luckily for the White Rabbits, the band has a built-in set of checks and balances, in that all of the members have to be on the same page about a decision in order for it to work. For the most part, Patterson insists they’re typically all on the same page from the get-go.

In addition to the band’s healthy rapport, another one of the unique strengths of White Rabbits is that the band is skilled at taking the force of the music and translating it into a format that is apparent both in live performances and on the recordings.

“We were absolutely going for ‘let’s capture the moment of inspiration’ [on the first album] and I think it worked incredibly well,” Patterson explained. “I think we retained a lot of the energy…and I’m really really proud of how that record turned out.”

As for the second album, he said they focused less on capturing the aforementioned moment of inspiration and instead spent a lot more time in the studio, laying down tracks and then working on the production aspect of it.

While Patterson admitted there are pros and cons to the spontaneous aspect of recording, he said the band gets excited about seeing the organic evolution of the new songs that occurs on the road prior to hitting up the studio.

And although it’s sometimes difficult to maintain the trademark energy on stage night after night, Patterson said the members also serve as a support system for one another when one might be feeling off or having a bad day.

“You try your damnedest to not show that you’re not feeling it. That’s not entertainment,” he said. “[But] we do the band full-time, [and] it’s not a bad job.”

White Rabbits play tonight at Magnet Club in Berlin. The show begins at 21.00.