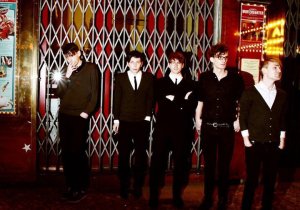 Where German indie bands are concerned, Ja, Panik is a bit of anomaly. For one, the group is actually Austrian, not German, despite residing in Berlin for the past two years. Additionally, the band pens German lyrics, which is often looked-down upon in many German music circles, either because it’s too complicated, it’s too nationalistic, or it’s too kitschy and campy.

“German in pop music or in music in Germany or Austria is always somehow connected to schlager,” singer and guitarist Andreas Spechtl said. “There are some people who can’t understand why [German-singing bands] use the same language as they use in schlager.”

But for Ja, Panik – which also consists of keyboardist Christian Treppo, drummer Sebastian Janata, bassist Stefan Pabst, and guitarist Thomas Schleicher – the reasoning for being a predominantly German-singing band is relatively clear-cut. While they identify neither as a schlager band or as part of the post-Hamburger Schule scene, the members still feel that singing what they are most familiar with is the obvious route.

“On the one hand, so OK, it [limits] you or your audience, but English isn’t our mother tongue,” Spechtl explained. “And I hate, for example, Germans singing in English and just trying to imitate some kind of accent or something like that.”

His solution is that Germans who do choose to sing in English should accept their accents as unique and try to own them. Spechtl likened this idea to what the band, Phoenix, does.

“They just sing this soft, strange, kind of French accent,” he said. “And I think in the future, that could be a solution for us, [but] on the other hand, I’m also really into German. I like German.”

Of course, while German is the most natural choice for Ja, Panik, this still doesn’t prevent the band from inserting the occasional English line into songs, something which Spechtl attributed to the influence of pop music.

“There are some lines that just come to my mind and they’re English,” he said, explaining that he doesn’t translate German to English when writing, so there’s no reason why he should do the opposite. “I don’t know about the future lyrics, but when I think about the songs I’ve written, they could only be in German. That’s the language and that’s the sound of the language and the rhythm of the language.”

The band members also agreed that sometimes hearing an English line nestled in between German lyrics can be familiar, simply because of the indoctrination of English-speaking pop music in the minds of German speakers.

“It feels a little bit like home,” Spechtl said.

And just as Austrians – particularly those in Vienna – use many dialectical words from French, the band pointed to the fact that the increased spread of English throughout both Germany and the world might have something to do with its now-frequent use by non-natives.

Interestingly enough, the band’s fourth and newest full-length, last year’s “DMD KIU LIDT” – “Die Manifestation des Kapitalismus in unserem Leben ist die Traurigkeit” – is full of English language references. Of the 15 songs, 14 have English titles, and all of them have English lyrics, ranging from only a word or two to entire texts.

This lyrical disarray is somewhat reflective of the changes the band went through for this album. With a label and booking agency in Berlin, the five relocated to the city in 2009, and “DMD KIU LIDT” is the first album of theirs to be written and recorded entirely in this country.

“It’s born and raised [here],” Spechtl said, sharing how it’s namely about “being a stranger in a new city.”

But it’s also a bold, new step for Ja, Panik. The band has acknowledged that it is always changing and growing and improving, with hopes to continue pushing the envelope with each successive record.

“We are on our way,” Spechtl said.

Andreas Spechtl plays tonight at Grüner Salon in Berlin. The show begins at 21.00.