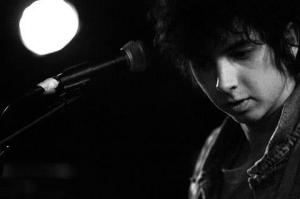 Trevor Powers is finding out about inspiration.

Currently, the dreampop musician more widely known as Youth Lagoon is on a European tour, traveling to cities he’s never been to before, experiencing new sights and sounds.

“The world is a strange place with many corners, and usually in those corners is something worth writing about,” he said.

It’s an interesting dichotomy, where Powers is traversing the globe after spending so much time in solitude. His debut album, “The Year of Hibernation,” was released in September of last year, and quite literally, the process of writing and recording the album involved a period of hibernation, in which Powers isolated himself in his bedroom.

It’s no secret that Powers was going through a rough patch prior to releasing the album, but eventually it came down to the choice between paying a therapist or putting that money into the album. Powers opted for the latter, which turned out to be a brand of therapy all its own.

“I think music is therapy. Whether it’s me playing it or listening to it, there is something powerful about music that can’t be said about any other thing,” he said. “[Through music and other things] I’m still learning about myself. I don’t think I will ever figure me out or my surroundings, at least completely.”

But Powers is still young, both in terms of age and his career as a solo artist, so he has plenty of time to try. In fact, his current European is his first. Accompanying him on the road is his friend Logan Hyde, on guitar.

“I’m only on stage with one other person…but I think it’s a rather big sound for two people,” he said. “I love playing shows. Love. So I’m always excited.”

Admittedly, when solo artists take their sound on the road for the first time, they often encounter difficulties translating the recorded content into a live sound. It’s also not uncommon for songs to take on lives of their own, leaving the musicians thinking about all the ways in which they would have done things another way on the recording.

But not Powers. He explained that he was very deliberate, making certain everything was just as he wanted it before committing to recording.

“There isn’t anything I would’ve done differently for this album, and I definitely was a perfectionist during all of it,” he said. “When I’m writing, I usually hear how I want that song to be interpreted as far as the recording process, because things are always so different when you start tracking. There’s all kind of subtleties that can make a world of a difference, so I like to concentrate on those.”

Because he works on his own, sometimes music can be a challenge and require the input of others to either validate it or help push the process along. However, for Powers, it’s more about being able to share with and feed off of the creative energy of people, in hopes that he can take away something from his interactions with others.

“It definitely does help to get outside opinions, because I love learning and hearing new ideas,” he said. “But as far as writing, I also like stumbling around by myself and figuring things out. Because at the end of the day, if I’m happy with something I create, I’ll be able to get all comfy in bed and fall asleep like a baby.”

As far as process is concerned, while the majority of musicians tend to prefer writing music and then adding lyrics later, Powers said he typically tends to write them alongside one another.

“I like both of them to be fused together and to sound like they were meant to exist in the same plane,” he shared. “Lyrics are extremely important to me. I know some people may find this ironic since ‘The Year of Hibernation’ had the voice be a very subtle instrument. But I think although lyrics are important, the song in [and] of itself is more important. Each song is comprised of many different elements and I think each of those elements should work together and that is what creates the final piece. So I like experimenting with my voice and using it in different ways, but no matter how it is used, what I am singing will always be important.”

One of the main reasons why those words are important to Powers is because of the idea of voice, something he took away from his time spent studying English in college.

“One thing I took to heart is every author has a different voice. And the best were ones who didn’t restrain themselves on what was proper or not. I guess you could define that as following the rules. There are no ‘rules’ and shouldn’t be,” he said. “I don’t know why it bothers me so much, but I think it’s mainly just because so often it limits people from creating what they truly feel. They start creating something that is exactly square or rectangle to fit inside the perfect little box instead of something that is an entirely different kind of shape.”

And according to Powers, keeping inside that boxed-in shape prevents people from growing, and from learning. While he admitted that learning can be overwhelming, he also shared that it allows people to exceed their own expectations. And he’ll endure the challenges of learning, so long as it provides an outlet for him to continue writing, recording and playing music.

“Music is my passion, and to be able to work at it, there’s nothing better,” he said.