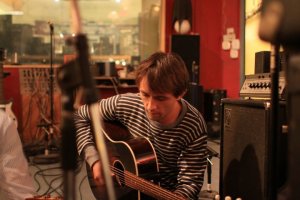 When music journalists and bloggers around the world began compiling their “Best of” lists for 2011, it was no surprise to anyone that Norwegian singer-songwriter Sondre Lerche was situated on many of them.

With the release of 2011’s self-titled record – his sixth full-length to date – Lerche shed his skin, once again divesting himself from the direction of his previous releases, this time in favor of a bona fide representation of who he is.

“Writing it and just getting through it was really freeing and intuitive,” Lerche shared over a cup of peppermint tea, a few hours prior to his Berlin show last October. “But [it was] really exhausting, you know, really intense.”

“I wanted to record [it] really fast. I didn’t wanna dwell, overthink things, so I gave us two weeks in the studio to record it,” he said.

Those self-imposed limitations stand in contrast to 2009’s “Heartbeat Radio,” which – instead of working with a specified timeframe – was an open-ended endeavor.

“It was important for me to not have a deadline,” Lerche said of the process two years ago. “It was a big undertaking. Like huge arrangements, lots of string arrangements, like a pretty big colourful record. That was sort of my goal, to do something without any restrictions.”

Yet once he finished “Heartbeat Radio,” Lerche’s next inclination was to strip things down, in hopes of producing something more intimate and pure. One first step toward that was literally limiting the tools and the means with which he would record.

“[I wanted to] see how much excitement we could create within each song, and how much intensity with as few elements as possible. So then that becomes the challenge and the quest,” he said, making certain to differentiate between making a specific kind of record and a perfect record. “Perfectionism for the sake of itself? I don’t think I’ve been interested in that in any of my records. They’ve all been deliberate and natural and heartfelt, but there’s something to be said of…setting limitations to help you think differently.”

Another way of making an album that was closer to the core of himself was recording in his own neighborhood, something Lerche had never done before.

“I really wanted to record a record where I lived, ’cause then I could walk to the studio and stay home, you know, and not be completely removed,” he explained of the decision to do the album in New York, as opposed to Bergen or Los Angeles, like in that past. “And also, I just figured I’ve lived in New York for six years and I haven’t actually recorded a record there, and I felt it was about time that I did that.”

The end result was 10 tracks that were eventually bestowed with a self-titled name, as Lerche couldn’t think of anything more apropos to call the album.

It’s germane, however, because although Lerche is known for stylistic departures between albums, “Sondre Lerche” feels like he’s finally become comfortable and found his own voice, so to speak. Furthermore, the album proved that Lerche doesn’t have to employ fancy measures outside of himself to make something worthwhile. Instead, sticking to the basics almost seemed to produce a more sincere version of himself.

“It’s about having the guts to cut down,” Lerche said, elaborating on the way in which he approached the album. “I wanted it to be very concentrated and very concise. So it was mainly about cutting down.”

More specifically, Lerche referenced the term “killing darlings,” as a method of trimming the fat during the recording process.

“We use that term a lot in the studio, because you fall in love with a little piece [of music],” he said. “If you have, like, one arrangement idea or even a whole song…it’s of course about stepping back and seeing it in context and seeing that even though…you have a lot of heart for that song, that idea, it maybe doesn’t serve the whole.”

Killing darlings occurs both in the writing and in the recording process, and although Lerche said he doesn’t need much affirmation when it comes to his music, he does have a sounding board or two of his own.

“I guess the person I return to is Kato Ådland,” he said, referencing his former bandmate and producer of his latest two records. “I think everybody needs some sort of validation and he is usually the first person – outside of my little home at least – that I play songs for.”

However, Lerche prefers the aspects beyond the actual writing itself to be more collaborative.

“Writing is really lonely, and it needs to be lonely. But [with] recording, I really crave other peoples’ input,” he said, sharing that not only does he like to utilize the creativity of the musicians he works with, but that it’s simply more fun to work with others during this stage. “It’s something that I really couldn’t do alone.”

Now that Lerche has completed both European and North American tours in support of the album, fans may be wondering what’s next for the blue-eyed crooner. But they also may be surprised to find out that even he is not entirely certain.

“Usually by the time an album comes out, I’ve got the next one written,” he said, referencing the fact that this is the first time he’s toured an album without having an inkling of what’s coming next. “I always write. I always have a couple of little things. But nothing that sort of really points in any direction. I’m not entirely sure what the next thing will be.”

Yet that uncertainty is not troubling for Lerche. In fact, it’s something that he welcomes and even enjoys.

“I’ve had all these albums sort of overlap the last 10 years and I’ve been fairly productive and put out a lot of records and had a good time, but it’s nice to not really know what the next project is and [keep] your options open,” he said.

In the meantime, Lerche has an impressive catalogue of music – compiled over the past 12 years – to stand in. And that’s quite alright for him, because that’s really what it all comes down to.

“I feel sometimes even I, when I’m on stage, I cloud the real message…being there and standing up and even being yourself and doing what you do, whatever that is, can sometimes get in the way of the actual song, which is what, really, I feel deeply represents what I do,” he said. “[Ultimately] the only thing I can really trust to represent me is my music.”