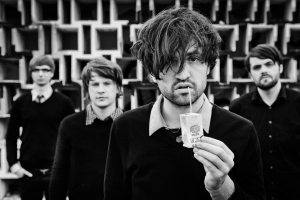 Adolar is a band that initially started with the intention of having fun.

“Everything [that] happened to us the last three years is just a bonus,” guitarist Jans Krieshammer said.

Although the members of the Leipzig-based quartet – which includes Krieshammer, singer and bassist Tom Mischok, guitarist and synth player MIchael Cyris and drummer Frank Mertens – have known one another for years, with a friendship dating back more than a decade, they were never serious about playing music together until just a few years ago.

It was at that point that Adolar became a band, shifting gears from playing music along the likes of skate punk to a more post-hardcore, emo-influenced sound.

“We decided to take the next step and do different stuff,” Mertens said. “[And] what we do is we bring [all our different influences] together. I think that’s the really cool thing about our band.”

Adolar’s first release, “Planet Rapidia EP,” is a three-song seven-inch released in 2009. That was followed up by 2010’s full-length, “Schwörende Seen, Ihr Schicksalsjahre!” And earlier this week, the second album, “Zu den Takten des Programms,” was released on Unterm Durchschnitt.

The approach to the second album differed from the first, in that the band took 10 months to write the songs, as opposed to the three weeks spent on the first album. This is because, as Krieshammer explained, the band had already booked a studio date for the first album without having enough songs, and was forced to write quickly to have enough for a full-length.

But in spite of the rushed approach, Krieshammer insisted the band has no regrets about how it turned out.

“We love it,” he said emphatically.

Mertens agreed, sharing that he feels it’s entirely representative of the kind of band Adolar is.

“It’s really what we are,” he said. “[There are] not too many thoughts on it…and you can hear that.”

As for the band’s songwriting process, they insisted that no one writes alone. Instead, the four pool their ideas and influences into the music, although it’s not always entirely easy.

In fact, Mertens likened the amount of arguing that occurs to an old couple who has been together too long. But of course, with every long-term relationship also comes compromise, particularly in instances where one of the members isn’t on board with what’s happening.

“If someone hates an idea totally, we just drop it,” Krieshammer said.

One exception to this rule is with the lyrics, as Mischok writes these on his own. But everyone else is fond of the words he pens, which Mertens said seem to tell stories.

“Most of the time he uses simple language, but he has a little way that is like in a poem,” he shared.

In the time since forming, Adolar has been on six tours, through Austria, Switzerland, the Czech Republic and France, in addition to Germany.

The most current tour, which began on Oct. 12, is exciting for the band, because the members are curious to see what the reaction is to the new album played live. Admittedly, the enthusiasm people show for the music is one of the best added bonuses to what Adolar does.

“Every time when you come to a place you’ve never been before, there are people who can sing your songs. That’s like, the biggest thing,” Mertens said. “When there are…people who are really passionate about what you do and who really get something out of it, then it’s just like, really rewarded a thousand times more than you have to sacrifice. That’s the moment when you know why you do that.”

Adolar plays tonight at Privatclub in Berlin. The show begins at 20.00.