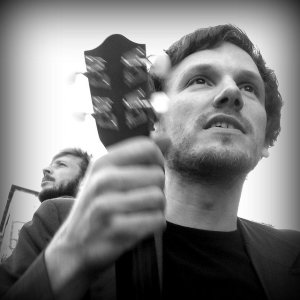 Matthias F. Brasch doesn’t consider songwriting a pastime, or a means to an end. Instead, playing music is a drive, a necessity, and a way of life.

Brasch’s songwriting outlet, Our Blanket Skies, is a manifestation of this urge, but his songwriting days predate it; Brasch has been writing music for the past two decades, his first song transpiring at the age of 12.

Since then, his person and his music both have undergone a small-scale evolution and a larger metamorphosis. But whereas many consider complicated songwriting to be the mark of a more mature musician, this is where Brasch differs. Instead he prefers his current approach to songs, involving straightforward melodies and a stripped back sound.

“I’ve had several phases [but] I’m quite happy with the phase I’m in right now,” he said. “I just have a lot of songs that I don’t play anymore because I don’t think that they’re good anymore or they don’t fit to me anymore.”

When speaking of his philosophical approach to music, Brasch – originally from Hamburg – immediately launches into the story of his move to Berlin four years ago, out of what he explained as a need to escape.

“I used to be in this indie pop scene in Hamburg for awhile, and I was a DJ,” he said. “[But] personally, I’m more into the folk scene right now here in Berlin. There are a lot of brilliant songwriters.”

And it was that folk scene that, in turn, grew the way he experiences music. After spending nearly every Sunday for more than two years at the Open Mic L. J. Fox at Madame Claude, Brasch found himself thinking of music in a new way.

“I learned that I don’t need to impress people…for me, that’s the kind of Berlin style. Because you can’t impress people with being impressive in Berlin. But you impress people if you’re doing something very dirty and freaky but you dare to do that,” he said. “That’s what I like about this anti-folk scene, you know? They don’t care about being impressive at all. They just do what they like. It’s about making friendship and community.”

Taking a cue from the musical community he immersed himself in, Brasch’s own way of doing things changed, not only in the way he wrote music, but also he presented it. Whereas his first album took three years – from 2003 until 2006 – to record, and involved incorporating multiple instruments and extravagant measures, now his music strives to be as far away from that version of himself as possible.

“It comes with the age. When you’re young, in your 20s, you want to prove to the world that you’re good and that you’re hot and that you can play guitar and you can compose songs with lots of chords and lots of changes,” he said. “[But since then] I learned that less is more.”

Brasch also believes in this principle as the way music should be recorded and performed.

“Everybody can record a perfect-sounding record nowadays,” he said. “But I have a feeling that…the people are tired of all these big productions, you know, and of this perfectionism.”

Instead, he prefers to play more intimate, acoustic gigs with just his instruments (namely guitar and ukelele) and, if necessary, microphones. These are the events where he said he feels most connected to what he does.

“[I] like these living room concerts or these bar concerts,” he said. “Where you can look at each other’s sweat, you know?”

Brasch has also been known to busk on the street corners of various cities throughout Europe, which also serves as inspiration.

“That’s so cool on the streets, because you don’t know what’s going to happen, you don’t know how your audience is going to be, and you know when the people stop and listen they really are interested in your music,” he said.

Of course, the downside of playing on the street, Brasch said, is having to listen to and play out his own songs over and over, and sometimes convince himself to keep playing them in spite of growing tired of them.

Of course he clarified that playing for the people doesn’t mean conforming to what they want, but instead being as real as possible while on stage and off. He continued, sharing that inspiration for writing songs and performing them can also be fleeting, especially as people grow older and become complacent.

“Art or creativity happens very often from being poor, from being hungry, or from being yearning for something,” he said. “As you get older, maybe settle down and get more comfortable, I think it happens automatically that you’re not that inspired anymore.”

And so it’s not the tangible things, like money or material possessions, nor is it a fancy, impressive recording, that please Brasch. Rather, he finds satisfaction in deep personal connections: playing music that others relate and react to, feeding off of that response, communicating on the most basic of levels with other individuals, and allowing music to just exist.

“I think the magical thing of music is that it’s…it’s like drifting, it’s floating, it disappears immediately. It’s there and it’s gone again, you know? And all you have is the memory of this moment,” he said. “Nobody can pay you that.”