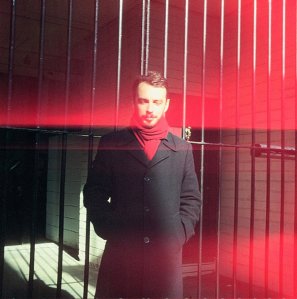 Stephen Burch never planned on settling in Berlin; it just kind of happened. He ended up in the city three years ago on a bit of whim, when he came out to play some shows and ended up staying because there was no reason not to.

Yet another thing Burch – an Englishman who operates under a moniker of The Great Park – never planned to do was become a singer-songwriter.

Although he has considered himself an artist for some time, it was almost never in the sense of making music. In fact, when he went away to art college in Exeter to study painting, he admits he was in the minority, because pursuing music was not one of his objectives.

“Lots of people go to art college to start a band, or to do music,” he said. “There’s this tradition of that.”

However, his plans for making art didn’t quite turn out, and he grew discontent with his pursuits.

“[I] quickly became really depressed with the process of making paintings,” he said. “And making big paintings on your own in the middle of nowhere can be quite a lonely, lonely experience.”

In the meantime, he began to try his hand at writing songs, a few of which he recorded on cassette and sent out to various newspapers and magazines. The result was some positive feedback, which unintentionally led to him playing shows.

But on a deeper level, it also gave him a creative outlet that felt much more real and immediate to him.

“Straight away it was this thing where I didn’t have to pick up my paintings and move them anywhere or spend a long, long time making things,” Burch said. “I could write songs fairly quickly, put them on a cassette – in those days – and send them to people. And it still amazes me now, the thing that they hear is the same that I hear…they don’t have to travel to [experience it] and it’s no problem to send.”

As for how he decided upon the name of The Great Park, Burch said it was prompted by playing a gig early on, accompanied by two other musicians.

“I felt really uncomfortable using my own name. I thought it was a bit daft,” he explained. “So I thought that if I used the name it would be a way of opening it up and not tying it down to just one person, and other people could come and play whenever they wanted to.”

The actual name itself, of course, is a reference to a 5,000-acre park in Windsor, which is a place of interest and intrigue for Burch. While the songs themselves aren’t all about the actual location, he uses it as a focal point for what he does write, with events or ideas originating from or taking place in it.

“It was a way of kind of limiting what I wrote about, ‘cause otherwise I thought I could write about anything, and it was driving me crazy,” he said of his naming decision. “So I thought if I write about things that are kind of fenced in, then that would make things easy for me. It’s like limiting your colours or something.”

While the concept of The Great Park is a tool for harnessing Burch’s creativity, it also goes hand-in-hand with the music Burch makes: honest and heartfelt, simplistic and straightforward.

“I don’t have very many, kind of, complicated songs,” he said. “I really like simple things…because often they follow simple structures.”

In fact, Burch also prefers to avoid particular labels which can obscure what it is he really claims to do.

“I don’t call myself someone who writes music. It’s like, I can write songs, and that’s OK, but music is sort of something else,” he said, reflecting on a semantical issue. “I’m terrible at writing music. The music is always weak. And I don’t think I’m great at writing words, but…if I have a strong point, it’s not the music, let’s put it that way.”

Regardless, that doesn’t prevent him from writing songs and writing often. And it’s somewhat difficult to keep track of the music Burch has released; a quick glance at his listed discography is slightly overwhelming, but suffice to say, the stream of output is steady.

This weekend, Burch will release his newest album, “Now Wash Your Hands,” a collection of 10 mostly-acoustic tracks, on Woodland Recordings.

According to Burch, the album isn’t something that came about as easily as in past years, but he surmised that it is because his current focus has shifted, for the time being.

“I think that’s just because I’m more interested in playing gigs…I make a couple of albums every year, and that used to be sort of what I did, and increasingly it seems that what I do now is play live,” he said. “And maybe that’s kind of, the work that I make…maybe that’s the work now. It’s not actually making albums of complete things, maybe it’s the body of work, and that includes playing shows.”

The Great Park plays tonight at Multilayerladen. The show begins at 21.00. Burch will also play on 17/09 at Intersoup in Berlin.