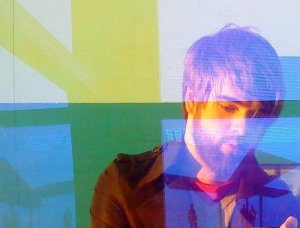 “It’s like a wish to be a Touchy Mob when you are actually just like one calm, stoic person,” he said.

Considering Plath, 22, is a soft-spoken and mild-mannered character, it might not be that far a stretch then, to dub Touchy Mob his alter ego, functioning as the more chaotically outspoken version of himself – even if that version exists more in the music than in the sphere of his personal interactions.

Whether he is the Touchy Mob or only wishes to be one, Plath admitted that as a musician, and especially a solo artist, “you can’t really avoid turning yourself into, like, a fictional thing.”

What he means is that he feels like his art is subjective – not only to himself, but to those around him – making him feel almost as if he’s perceived as a caricature of himself.

“Even the words you choose to communicate…over time and over time and for the more people you do it, the more it turns into, like, fiction,” he said.

Although Plath has played with other people in different projects, he fiercely protects the idea of Touchy Mob as his personal endeavor. Additionally, regardless of how others construct their image of him, the moniker remains crucial to his identity. Part of that reason is because he acknowledges that his tastes or musical direction might change, and he wants to have the freedom to follow through with it.

“I don’t really want it to have, like, a super distinctive sound, or something like that – a very narrow, or limited range of sound,” he said. “In a year, I don’t care, it could sound completely different. And I like the idea, of like, changing something but keeping the name.”

In fact, the diversity of style showcased in his music, which is available for free download, doesn’t pinpoint his music or place it in one genre, allowing for that musical mobility to exist, especially where inspiration is concerned. The music itself runs the gamut from chill, minimal beats to stripped down acoustic tunes reeking of charming folk sensibility – always with the potential to evolve.

For Plath, he said that while books, movies and music constantly surround and take root in him, he finds it difficult to explain where ideas are specifically derived from – which in itself lends to the flexible nature of not only where the music comes from, but all the directions in which it can go.

“You always are in love with something else,” he said, speaking to the fleeting nature of being inspired.

It was around the age of 17 or 18 when Plath began be inspired by the idea of not just playing music, but recording. He experimented first with GarageBand, using it to delve into the world of self-taught recording and producing.

Still, it remained a hobby, or something that he only did half-heartedly.

“I always, like, started something, like a sketch of a song or something, but left it 50 percent, because it’s always more fun to start something and make it into 50 percent and then do something new,” he explained.

Eventually, two or three years ago, he reached a turning point, and realized that finishing the songs was a first step toward making something more tangible and coherent of his interests.

“Basically, I think it was mostly about the fun, that it’s so easy to do it,” he said, sharing that he initially posted music online as a way for friends to hear it.

Soon, however, he began to play live. It was at this point when Plath’s music began to undergo a metamorphosis. In the past, he’d spent a lot of time writing and recording a song, and then listening to it. But once he added in the live element, and made it less about recording, suddenly it changed the way he approached his music. More specifically, he now was not only playing songs that had already been recorded, but also recording songs after they’d already created a life of their own on stage.

“Especially when it’s a song I have already been playing live for half a year or something, it’s really hard, because usually, I had, like, finished songs, and then to play live I could just stretch and destroy them,” he said. “But to do this process backwards and play live…you know the sound from a song, you know it only in the room, like in the sound of a room, and then it sounds so so small and dry and weird when you have it on headphones again and it’s really hard to find a sound that matches the feeling you love about the music you do yourself in that live setting.”

As for the live show aspect, Plath estimated that by the end of 2011, he will have played close to 90 shows this year.

And although he is somewhat of a veteran now, he admitted he also still gets nervous from time to time.

“But I enjoy that nervousness because it’s like part of the thing. [Being a solo artist is] always a little unstable, but it’s part of the thing,” he said. “[And] I’ll do it until it doesn’t feel as-good-as-now anymore.”

Touchy Mob plays tomorrow at Lovelite in Berlin as part of the Flink Festival. The show begins at 17.00.