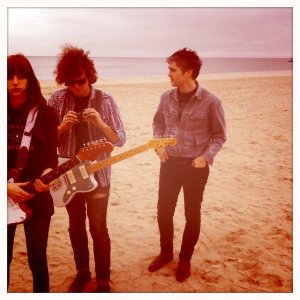 Naming your band Ringo Deathstarr is a pretty ballsy move, because it implies a certain level of musicality to live up to. But the Texan trio of Elliott Frazier, Alex Gehring and Daniel Coborn, have gladly risen to that challenge, harnessing a derivative of noisy shoegaze and transferring it into the new decade. The end result is magically dense sound rife with jangle-y pop hooks and plenty of saccharine fuzz.

Although the band has an EP and several singles to its name, it wasn’t until earlier this year that the full-length debut, “Colour Trip,” was released – and to generally favorable reviews.

“We are proud of [the album] and we are glad that people like it and are still talking about it,” Frazier said.

And although it’s easy for many musicians to tire of or become critical about an album after its release, Frazier insisted that the band remains pleased with the end result, six months after the fact.

“[We have] no regrets about the recording,” he said. “I am a perfectionist when it comes to the final product, so I spent countless hours thinking about how the mixing should be.”

As for the songwriting process itself, the band has an interesting approach to making music.

“We are not musicians, or songwriters really,” Frazier insisted, sharing his haphazard way of constructing songs. “I can’t play guitar that well. I can only play our own songs. I’ve been playing in weird tunings, and usually I come up with some chord and then use that as a basis to get a song going.”

Generally speaking, he said that often the lyrics are an afterthought, although not always.

“Sometimes the opposite is true,” he said. “Sometimes the lyrics refer to specific things, and most of the time they refer to many different things in one song, just snippets of past lives and things.”

The band is on a European tour, tonight being its second time in Berlin. And although they have some new songs, they haven’t been fully fleshed out in rehearsal, so fans can expect the typical loud, fast live set the band is known for.

In spite of positive reactions to the album, the band has received some negative press, mostly pertaining to criticisms of the sound being a rip-off of older bands. While he said it’s sometimes difficult to ignore or reject the negativity stemming from other people, Frazier said that when the band does manage to do just that, it’s when the results are the most rewarding.

“The best thing is to do what you wanna do and not care what people are thinking,” he said.

Ringo Deathstarr plays tonight at Comet Club in Berlin with Puro Instinct. The show begins at 21.00.